A New Theatre for Rotherhithe – perhaps

­
Previous Next
A New Theatre for Rotherhithe – perhaps

Many people have been saddened to see the Pumphouse at Lavender Pond left empty and vandalised since the Museum closed in 2011. Now the LB Southwark have launched a search for the next phase of its life. And one local has already come up with ambitious plans to convert the former industrial building and museum into a cultural hub and theatre. Daniel Sparrow has recently moved into the area, bringing with him years of experience as a highly successful producer of West End plays and musical theatre. 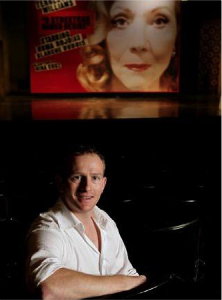 “I think we need a rethink in our approach to theatre in London,” said Daniel when we met for coffee at Canada Water Café. “The theatres of central London provide a global draw but it’s hard to innovate because West End productions are so costly to stage. Small theatres – or “Off West End” venues – across the city are taking up the challenge and many are located in interesting and picturesque buildings. Creativity is stimulated in unusual settings and I think the Pumphouse an ideal building to create new productions, foster new talent and as well bring a taste of the West End to SE16.”

“…With a little TLC, the place can be ready and open as a rehearsal space within a month or two…” 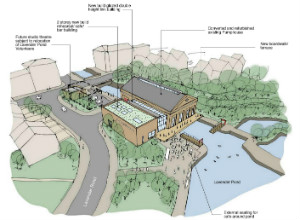 Daniel is proposing to bring in £4.5M investment to transform the Pumphouse into a new state-of-the-art cultural hub comprising a 360+ seat theatre, 100 seat studio and multi-use rehearsal rooms with a waterside boardwalk-style café / restaurant. He plans to fully restore the existing building, preserving it as an historic asset and extend the building whilst retaining the main structure and all of the distinctive features. The Pumphouse Theatre Project will employ a full-time education and community officer to develop a range of theatre clubs for 2-14 year olds and drama and ecology educational projects for local school groups. Local people will be invited to join in from the start with open days, pop-up theatre events and resident ticket incentives.

“Many people have fond memories of using the old Museum and visiting the nature reserve,” Daniel acknowledged. “We want to ensure that the new world-class theatre contributes positively to the local environment for the local fauna and flora as well as the community’s residents. In fact the setting is part of the important draw for visitors to the centre so it’s vital we develop and sustain the habitat for wildlife and community together, whilst making the surroundings more beautiful for everyone’s enjoyment. We will be donating to the Lavender Pond Nature Reserve up to £60K each year by way of a conservation ticket levy and we are working with residents to ensure the potential problems of parking, transport and noise are all addressed and satisfactorily reduced early on.” 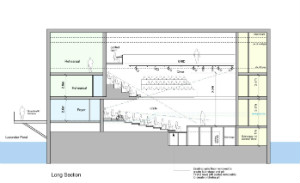 “I’ve always believed that theatres can be a hub for community life. The arts bring people together and can help a community reframe the way it sees itself. Rotherhithe is changing quickly today and we know that the theatre project could play a key part in helping the community tell a new story about itself. By creating a new cultural landscape for Rotherhithe, we know from experience elsewhere that it will draw in further investment and create new jobs and real economic value for the local area as well as improve the safety of the neighbourhood. The Pumphouse Theatre Project needs no money from the Council and will be financially sustainable without subsidy. I think it’s a win-win for the whole area.” 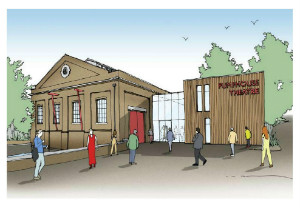 Daniel is clear that the proposal is just that. The Council has recently decided to put the use of the Pumphouse on the market, inviting those with an interest in using it to send in their ideas. The Council have clarified that the primary use must be for public access (D1/D2) and not for residential purposes. The Council hopes that the bids will all be received by mid-January and that conversations with the different interested parties will lead to a planning application later next year. Daniel is hopeful that with the support of local residents he will be successful in his bid to get a long-term lease from the Council and to be able to start the project in Autumn 2016.

“It’s such a great opportunity to develop something so exciting and ground-breaking on my doorstep. I’m keen to get on with the project and to start to make use of the Pumphouse even before the builders move in. With a little TLC, the place can be ready and open as a rehearsal space within a month or two. We could see acting companies using the space or dance instructors holding classes in a matter of week. We might be able to create some site-specific productions and create a pop-up café to open the place up to the local community early on. And of course the project development plans would be out for everyone to see, consider and ask questions. The project is all about creating a community-based arts centre for world-class productions.”

Sketches above are concept drawings only. David Hughes Architects have done the early work on the project and these drawings do NOT represent the final plans.