London is full of statues to long forgotten generals and field-marshals. It’s not very often that an ordinary lad from a poor background gets to be memorialized in our streets. And even more unusual is that this particular World War I hero came from Bermondsey and his memorial sculpture has just been made in Rotherhithe! 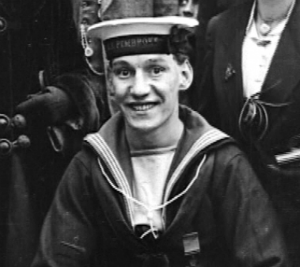 The journey from the battle for Zeebrugge harbour in 1918 to the unveiling of the sculpture this year is a long one. The acts of heroism on 23 April 1918 have left an enduring mark on the collective memory of both British and Belgian communities. But they have been remembered only haltingly over the decades since and it is the determination, resolve and researches of a few friends and relatives that have brought Albert’s name to public attention again in recent years. The culmination will be a suitable tribute to such gallantry in the face of formidable odds. 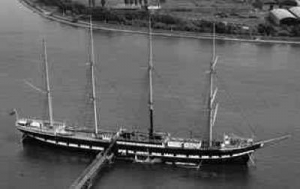 A fighter from the start

Albert was born in Alice Street just off London Bridge Road in October 1898. The family was part of the local dockland community and supported Millwall to a man (and woman no doubt). Albert joined the training ship Arethusa aged 11 moored in the Thames between Dartford and Gravesend. In a tough environment, he became a boxer and at fifteen went on to sign up for the Boys Service of the Royal Navy joining the training depot HMS Ganges, Shotley, Suffolk in 1913. There he won medals for boxing and when he joined HMS Neptune in Scapa Flow he even reached the Royal Navy finals at his weight. 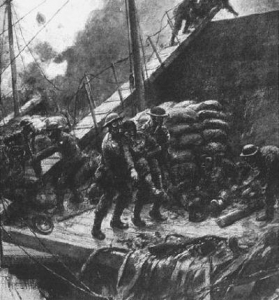 Albert carried from the mole – drawing

By 1918, the Germans had established Bruges as their main U-boat base. Being inland, the subs had to navigate a canal to Zeebrugge where a massive sea lock gave them access to the Channel. On the night of 23 April, after two aborted attempts a fleet of Royal Navy ships sailed into the heavily fortified port. They intended to block the canal entrance by sinking obsolete ships. As part of the Zeebrugge Raid, Able Seaman McKenzie was part of a storming party detailed to take the mile-long mole – a huge stone harbour wall. Just after midnight, the landing party came under sustained bombardment from shore. Albert was landed on the mole from his ship HMS Vindictive carrying a huge Lewis machine gun. He lost his commanding officer and most of his party but shot several enemy sailors heading for a German destroyer alongside the mole. In a most exposed position, he fought on despite losing the gun from his hands and being severely wounded in both the back and foot. He was only returned to HMS Vindictive when a fellow sailor carried him back aboard. 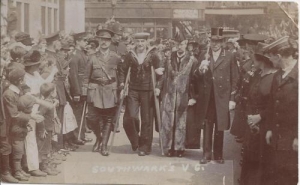 The Zeebrugge Raid was a celebrated British victory and the crew of HMS Vindictive chose Albert to receive the Victoria Cross for his bravery. He was still on crutches recovering from his wounds when on 31 July 1918, Albert went to Buckingham Palace with his mother and sister Mary to receive his award from King George V. On returning to his mother’s home in Shorncliffe Road, Bermonsdey, he was given a hero’s welcome. The Mayor of Southwark honoured him as both the first London sailor to receive the Victoria Cross and the first to receive it by the vote of his comrades. Sadly Albert’s life was soon cut short. Still at Chatham Naval Hospital he caught the ‘flu in the epidemic that swept the world that year, developed pneumonia and died on 3 November only ten days after he was 20 and eleven days before the war ended. He was buried with full military honours in Camberwell Old Cemetery. 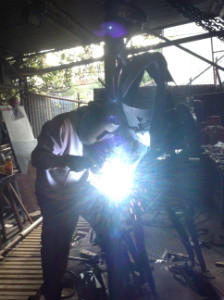 Steve Cornish volunteer welds the Lewis gun to the sculpture

In 2012, a memorial fund was set up by a group of friends to find a way to remember Albert’s gallantry. The fund drew support from Simon Hughes MP, Millwall Football Club, the Royal Navy and others and the decision was taken to create a sculpture of Albert on the mole carrying the Lewis gun. Kevin Boys – the blacksmith who works the forge at Surrey Docks Farm in Rotherhithe – was commissioned to forge a figure of Albert in steel. The location of the memorial was agreed to be the junction of Tower Bridge Road and Grange Road, not far from the famous Manzies Pie and Mash. Installed on 15 Oct, the 12m plinth is made of three 30 tonne concrete sections recalling the mole on which Albert fought. Indeed one of the three sections is from the harbour wall of Zebrugge itself and comes as a gift from the Mayor and people of Flanders.

On Friday 23 October 2015 – 97½ years to the day since the Zebrugge Raid – Lord West of Spithead, former First Lord of the Admiralty will unveil the sculpture at midday. The Parachute Regiment military band will play from 11:30 and HMS Belfast – at anchor in the Thames – will fire a salute at noon. Speeches will follow from Paul Keefe – chair of the Memorial Fund, Lord West himself, Colin McKenzie – Albert’s great-nephew who has done so much to research his great uncle’s career and achievement – and Carl Decaluwe, the Governor of West Flanders where the Raid took place. The final speech will be from Sir Simon Hughes who has been involved from the first in the project.

As we edge closer to the centenary of the Zeebrugge Raid, it is fitting that we find a moment to remember those who fought and lost their lives to protect their country and those who continue to do so today.

Detail on the Zebrugge Raid and the Memorial Fund