Artists tell the story of SE16

­
Previous Next
Artists tell the story of SE16

Painting and writing have accompanied the development of SE16 through the centuries. The pictures of the past painted both by wordsmiths and artists give us a rare glimpse of their world. The author offers us in words the image that is helped by the painter’s pictures. The life of our forebears in SE16 was very different to our own yet reveals the same concerns as we share today. 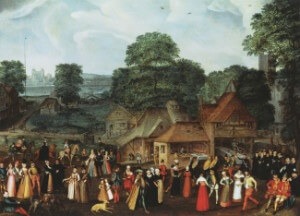 One of the earliest images of SE16 comes from the Renaissance when Bruges exile and English court-favoured Marcus Gheeraerts the Elder painted this scene in oils now called the ‘Fete at Bermondsey’ in 1569, currently at Hatfield House, Hertfordshire. It shows a procession of finely clad figures set in a village and landscape with a river and tower beyond. Indeed it is one of the very earliest English landscapes. At this time, Bermondsey was enjoying an Elizabethan renaissance of its own with the establishment of Bermondsey House and a court painter making this visit. Perhaps this is just a precursor for the Bermondsey Carnival that was to come? 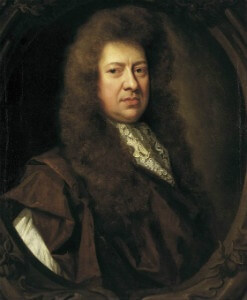 Diarists particularly remembered their visits to Rotherhithe in the seventeenth century. Two of the finest – Samuel Pepys and John Evelyn – both recall what we know as SE16 today. Pepys was professionally involved with Rotherhithe – or Redriffe as he called it – as he worked for the naval administration. He often came to Redriffe by boat but also on occasions walked the distance to the Deptford dockyards through our area. Late in life, John Evelyn writes in his diary in 1699 about Rotherhithe: ‘a dreadful fire destroying three hundred houses and divers ships.’

As the maritime trade with Britain’s swelling empire grew, so the importance of the Thames came to the notice of painters, etchers and other artists. Samuel Scott painted his ‘A Morning with a View of Cuckold’s Point’ between 1750 and 1760 that now hangs in Tate Britain. The picture shows a famed large post topped with a pair of horns, the emblem of the deceived husband. The post marked the place where the Horn Fair set off for Charlton – an annual bawdy, dissolute and fancy dress parade established in the Middle Ages. In 1813, William Daniell etched and then painted ‘A View of the Commercial Docks at Rotherhithe’ which now graces the walls of the British High Commission in Colombo, Sri Lanka. From an elevated position, the etching shows the docks busy with ocean-going vessels and many smaller sailing barks and wherries.

Of course Southwark’s own Charles Dickens left behind him the quintessential image of Victorian dereliction and poverty in his description of the rookery Jacob’s Island in Bermondsey. In Oliver Twist, Dicken’s principal villain Bill Sikes dies in the mud of ‘Folly Ditch’:

“… crazy wooden galleries common to the backs of half a dozen houses, with holes from which to look upon the slime beneath; windows, broken and patched, with poles thrust out, on which to dry the linen that is never there; rooms so small, so filthy, so confined, that the air would seem to be too tainted even for the dirt and squalor which they shelter; wooden chambers thrusting themselves out above the mud and threatening to fall into it – as some have done; dirt-besmeared walls and decaying foundations, every repulsive lineament of poverty, every loathsome indication of filth, rot, and garbage: all these ornament the banks of Jacob’s Island.” (Oliver Twist by Charles Dickens)

At this time in 1839, Bermondsey was overrun with the vast increase in its impoverished population and soon became a byword for deprivation, squalor and disease. Few spoke out as Dickens did against the inhumanity of such conditions but nonetheless many dedicated their lives to improving these hideous conditions.

“…The post marked the place where the Horn Fair set off for Charlton – an annual bawdy, dissolute and fancy dress parade established in the Middle Ages…” 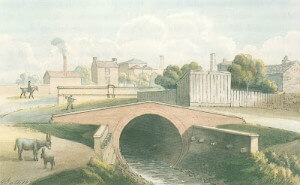 Behind the riverside decay and contagion, new areas of housing and industry were soon swallowing up the gardens of both Bermondsey and Rotherhithe. Poor, mean and often without fundamental services, these hovels gave the residents a roof and a job but not much else. In 1826 George Yates painted ‘Earl’s Sluice’ which was by that time in essence a sewer passing as it did many industrial and domestic locations on its route from Denmark Hill to issue into the Thames at the border between Rotherhithe (then in Surrey) and Deptford (then in Kent). The idyllic picture of industry sited alongside the water’s edge belies the stench of effluent that must have assailed any visitor to the area. 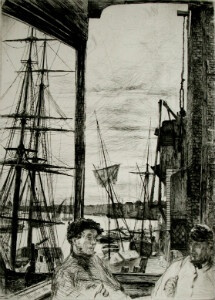 An American in SE16

James Abbott McNeill Whistler was born in Massachusetts in 1834 and in 1860, both painted and etched from the balcony of The Angel pub near Cherry Gardens. He produced four artworks – one called ‘Rotherhithe’ (or Wapping), a second etching called ‘The Little Rotherhithe’, the third and fourth paintings called respectively ‘Wapping’ and ‘The Thames in Ice’. The confusion about the titles comes from the subject matter, showing both the south Rotherhithe bank of the Thames and the opposite northern Wapping bank. The image here is the first and one of the most sought after of Whistler’s ‘Thames Set’. It shows his command of the medium whilst capturing two men at leisure in a typical view up the Thames toward St Paul’s in the distance.

“…At this time, Bermondsey was enjoying an Elizabethan renaissance of its own with the establishment of Bermondsey House and a court painter making this visit. Perhaps this is just a precursor for the Bermondsey Carnival that was to come?…”

Many more have written and painted the pleasures and the pressures of Rotherhithe and Bermondsey in the later nineteenth and early twentieth centuries. But those witnesses to the changing nature of our community will have to wait for another day. With the arrival of the huge dock enclosures in the latter part of the nineteenth century and the transformation that trade and timber brought to this area, many more took the opportunity to tell or show it as it was. They will have to wait their turn.

To find out more about Southwark’s own historic and artistic collections, search the Cummings Museum, the Southwark Art Collection and the Local History Library image collection here.

Grateful thanks to Andie Byrnes (A Rotherhithe Blog) and Michele Page-Jones (@WorgInfo) for help with this article.