Graham Taylor has been a chess player since early days. Following a career as an economics and history lecturer in higher education, Graham has become the driving force behind the Canada Water Chess Club which he founded in 2008. He is a robust advocate for the benefits of regular chess. “It’s extraordinary what the research shows. For children, playing chess regularly raises IQ scores, strengthens problem-solving skills, enhances memory, reading, language and maths abilities and fosters creative thinking. With the help of the national Chess in Schools, some London Boroughs now build chess into the life of every primary school child as a full lesson with trained coaches, not just as an after school club.” 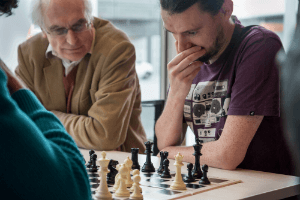 The club has been meeting in the ground-floor lobby of the Canada Water Library for three years. It reflects Graham’s commitment to keeping chess free. “We have no funding except occasional donations we get from friends and supporters,” says Graham. “The club can’t afford to hire any space but nonetheless we want to keep the club free for all. We don’t even have a membership! Anyone can turn up and they will get a warm welcome, a seat at a chess set if they want and a game at whatever level they can play. The joy of chess is importantly available to anyone who wants to apply themselves and we shouldn’t put money in the way of them. Beginners to Grand Masters are welcome!”

“…they shared lots of scientific evidence that chess really helps people with mental health issues such as depression, autism and schizophrenia…” 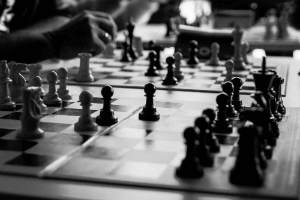 Back in 2008, Graham started the club as a way of bringing together young people from the Millpond estate. Indeed it started at the Millpond Community Hall at a time when the hall was looking for more users to hire space. Graham persuaded the Tenants and Residents Association (TRA) chair to let him use some space and about ten people young and old played chess weekly. As an active local volunteer, Graham had already helped Wilma Nelson, the TRA chair start up a bulletin and subsequently was drawn onto the TRA committee. Now the Millpond Hall is getting a facelift and Graham has already reopened the club there again on Mondays 19:00-21:30 at the newly christened Cherry Garden Hall on the corner of Jamaica Road and Southwark Park Road. 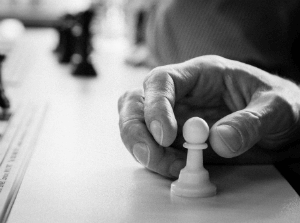 “There are several ways to play chess though they all follow the same rules in general. Classical chess gives each player three hours to make their moves and if neither player has achieved a checkmate by the end of their time, a draw is agreed or the game may be adjourned,” explains Graham. “Rapidplay chess applies a speed element to the play by restricting each player to only 30 minutes in total. Thinking has to be quicker and more matches can be played in an afternoon. Lightning chess – as the name implies – is almost instantaneous! Each player has only 5 minutes to complete her/his moves and win the game. Run out of time and you lose the match! It requires rapid decisions and plenty of quick fire anticipation.” If you want to see lightning chess in action, go along to Canada Water Library on a Saturday! 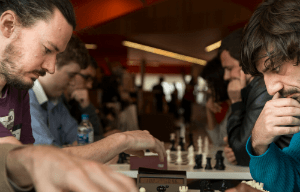 The club, now operating on two sites, has grown so much in size  Graham has hopes of hosting a tournament in SE16. “We want to share the fun of the game with a wider audience and we are looking to hold a Southwark or South East London competition over a week or weekend in 2016. In December I went to a great conference run by Chess in Schools and Communities at Olympia. It was very inspiring and they shared lots of scientific evidence that chess really helps people in areas of social deprivation or with mental health issues such as depression, autism and schizophrenia,” says Graham. “Disadvantaged kids gain hugely from playing chess regularly and in Extremadura – one of the poorest parts of Western Spain – the regional government requires every primary school to teach chess to every child. Chess in Schools and Communities has offered to help us make the Southwark tournament a success and so we are just looking to find the right venue and dates.”

Graham is a historian and biographer as well as a chess enthusiast. His recent book about the local socialist Ada Salter has more than a little to do with chess. “Ada founded the very first chess club in the area at Bermondsey Settlement and was a keen player herself,” says Graham. “She thought – along with John Ruskin – that chess and beauty were the answer to working-class self respect; they are both cheap and easy to provide and have a huge impact in improving the way people think, react and work together. Ada played herself in the South London Chess League when few women played competitive chess.”

Cherry Garden Hall (formerly the Millpond Community Hall) provides a free chess club for anyone who wants to turn up on Monday evenings 19:00-21:30

[Photos by Barney Moss Canada Water Chess Club on Flickr; with thanks under Creative Commons licence]