Cycle Speedway in Bermondsey – BMX in the 1940’s

­
Previous Next
Cycle Speedway in Bermondsey – BMX in the 1940’s

We are pleased to welcome Patricia Dark, Borough Archivist as our guest blogger today. Here she provides us with an insight into the amazing post-war role of bicycles in the entertainment of SE16. 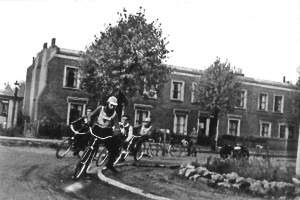 Keep them off the streets

In 2004, Peckham DJ CK Flash started a BMX track on Naylor Road, clearing the land himself with a strimmer – power for the track’s lights came from an extension lead run from a nearby house. Four years later, BMX Peckham was the top club in the UK; in 2013 the club moved from Naylor Road to one of the country’s largest BMX tracks, newly built in Burgess Park. While the club’s alumni include Olympic hopefuls Tre Whyte and Quillan Isidore – the stars of the 2014 film 1 Way Up – the club has a much simpler, more important purpose. As Flash noted in a Guardian interview (17 July 2014), “[w]e take a lot of kids off the streets by doing what we do.”

The more things change, the more they stay the same. Nearly 65 years earlier, another cycle sport did the same thing for young people in SE16. As Bertram Duffield, the chairman of the National Cycle Speedway Association, told The News of the World (9 October 1951), “[c]ycle speedway brings young people together in a healthy atmosphere and keeps them off the street corners.” Cycle speedway is the grandfather, so to speak, of modern BMX. To understand why – and especially to understand its impact on places like SE16 – you need to understand where it came from. 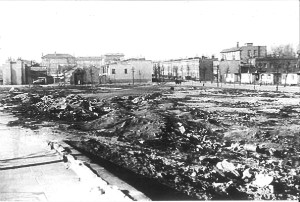 Paterson Park before construction of Track and development of Park

It came from the end of World War II, and from abundance. An abundance of bomb sites: according to Bermondsey council, more than 4,000 homes in the old metropolitan borough – which included SE16 – had been destroyed, and almost all of the 19,000 that remained were damaged; similarly, nearly 300 factories and warehouses were gone, almost half the borough’s schools, and most of its public buildings, leaving rubble-filled waste ground in their wakes. An abundance of bored young people: younger children returning from evacuation mixed with those who’d stayed in London, and older boys whose expectations of wartime service evaporated with the peace. With so many schools, workplaces, and community buildings out of action, there was nothing to do and nowhere to go. Toys and games would have been in short supply, too; the materials to make them were diverted first to the war effort and then to reconstruction. Finally, an abundance of worn-out bicycles: after 6 years of war and parts shortages, a beloved toy or a vital tool simply would not have been in the best nick.

“…they competed in the first round of the 1949 world cup, and their rider Gus Garrett was London county champion and took third place in the national individuals championships in 1952…”

From the spring of 1946 onward, these things came together, and revitalised a sport in the process. Many young men were fans of motorcycle speedway, a motosport from the late 1910s that pits teams of riders against each other over four laps of a flat, oval track made of dirt, gravel, or cinders – riders aim to slide the bikes round the turns. Young people in bombed-out London generally didn’t have motorcycles. But they did have lots of places that could become flat, oval cinder tracks. And they did have lots of pedal cycles with no gears and no brakes. 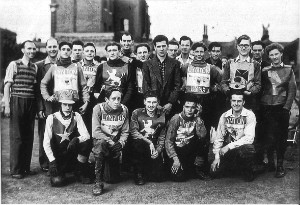 So, in their spare time, in evenings or on weekends, they cleared the bombsites, leveled and surfaced them. They found bikes, created teams, made or scrounged team uniforms and protective equipment, developed rules, leagues, and etiquette: unlike its motor-powered cousin, cycle speedway didn’t involve sliding the bike round corners. But it did involve a lot of speed – 18 to 20 miles per hour – and a lot of collisions. So teams built safety fencing, concrete “white lines” to mark the edges of the active track, starting grids for riders – even electric lighting, powered by nearby buildings! Cycle speedway didn’t just give athletes a chance to shine: young people generally ran clubs themselves, so there were opportunities to develop skills and talents in mechanics and repair, marketing, race/tournament organising, and fundraising as well.

“…In March 1951, the Daily Mirror published a photo of Bermondsey Greyhounds star Pat Gore signing autographs for his fans during the London championships…”

By the early 1950s, cycle speedway, like BMX today, was international, with British teams competing in invitationals in the Netherlands and Germany. Prince Philip, who served in the Royal Navy with an official for Clapham Panthers, provided royal patronage through his presidency of the National Playing Fields Association. Bike manufacturers produced specialised cycle speedway bikes, much like the BMX market.

Cycle speedway was also enormously popular, and arguably more mainstream than BMX is today. Cycle speedway matches were heavily reported in the local, and even national, press. In March 1951, the Daily Mirror published a photo of Bermondsey Greyhounds star Pat Gore signing autographs for his fans during the London championships. Later that year, in October, The News of the World’s speedway correspondent, Dudley Smith, produced an in-depth report on the sport, complete with a picture of cycle speedway WAGs! In 1953, the movie Skid Kids, directed by Don Chaffey, debuted; it gave audiences a window into the sport and the communities that supported it. 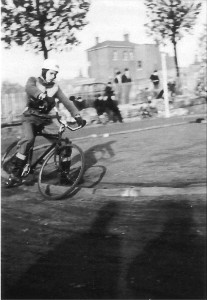 SE16 had two cycle speedway teams – the Verney Lions and the Lynton Lynx. The Lions took their name from their first track, a bomb site on Verney Road. They later moved to another track in nearby Varcoe Road that they shared with Pegasus; Peckham’s MP, Freda Corbet, opened it. The Lions tasted success early: they competed in the first round of the 1949 world cup, and their rider Gus Garrett was London county champion and took third place in the national individuals championships in 1952. The Lynton Lynx also took their name from their first track, another bomb site, on the corner of Lynton and Balaclava Roads. They later moved to a bombsite on Lynton Road, next to the Bricklayers Arms railyard and behind the Sultan pub. They were cleared off this site so the London County Council could build Paterson Park. However, the mayor of Bermondsey was chair of the committee overseeing the new park – and made sure it included a dedicated cycle speedway track!

Jim Saunders was one of the young people who got involved in cycle speedway – “skid kids”, as the press insisted on calling them. In the Southwark News (2 February 2012) he explained that he and three friends, all keen motorcycle speedway fans, were inspired by a trip to the Catford track to:

“…[get] some old bike frames and cut them down to look like motorcycle speedway bikes and we painted them yellow – I don’t know why yellow, I suppose it was the only paint we could get! Anyway, we decided to go and have a laugh trying them out on the Verney Lions track. But we got caught. The boys from the team came out and said, ‘Do you really want to ride, or are you yellow like your bikes?’ So we became part of the team.”

Unfortunately, the sport peaked in London in the early 1950s; by end of that decade, most London teams had disappeared. National Service made it difficult for teams to keep their rosters full, while urban redevelopment forced the closure of bombsite tracks. But cycle speedway did make a mark: several elite cycle speedway riders moved over to professional motorcycle speedway, and many other riders were left with a lifelong love of cycling. One of them was Jim Saunders, who was a dispatch rider in the Army. Another is Jim Varnish, the father of European gold medal cyclist Jess Varnish. There are still 40 cycle speedway teams in the UK; the sport, which is now overseen by British Cycling, often introduces riders to other cycle disciplines.

Want to learn more? Skid Kids (1953) is available to rent online at the BFI, or you can visit the Southwark Local History Library & Archive to explore our collection of images, press cuttings, and other material on cycle speedway. If you’re interested in competing, you can visit British Cycling’s website for more information on cycle speedway or BMX.