­
Previous Next
Cycling in SE16

Linda Kemp gives us the low down on cycling round here

I’ll admit it, hands up, I’m not a cyclist, although I have been known to venture forth on the odd occasion during the summer months. However my partner, alongside many other cyclists in the area, commutes daily along the excellent cycling paths in SE16, particularly in Russia Woodland, around the various water spaces and along the Thames. And it is completely flat, an added bonus! 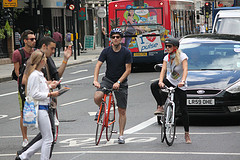 To make cycling even more easy locally, there are some important additions to the cycling landscape in SE16 currently being built or planned. At the southern end, a new Quietway arising from the Mayor of London’s “Vision for Cycling” is being built. The route includes the new pedestrian/cycle bridge over Rotherhithe New Rd at South Bermondsey Station and runs west across SE16 from there. There will also be a new link eastward when a path is created later this year, between the bridge and Surrey Canal Road.

In conjunction with the redevelopment of the Print Works site and the Surrey Quays Shopping Centre, a Greenway for cyclists and pedestrians linking Russia Dock Woodland to Southwark Park is being planned. Southwark Cyclists tell me that they have met with the land owner – British Land – to discuss this and other cycle routes in and around these planned developments. In addition, they are still hopeful that a planned Cycle Superhighway along Lower Rd and Jamaica Rd will eventually be implemented.

There are also the health benefits of cycling. With the recent prominent support for the exciting “Brunel Bridge” proposal that will link Rotherhithe and Canary Wharf with a pedestrian and cycling bridge, this would be an excellent way to persuade others like me to swop the overcrowded and hot Jubilee line carriages for the fresh air and freedom of the bicycle, plus being able to travel for free! Read more about it here. 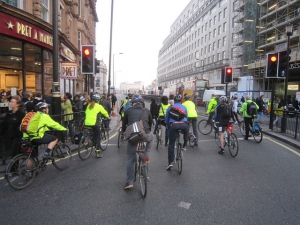 run monthly Healthy Rides from Canada Water (beside the Library). Usually just a two hour saunter starting at 10:00, their rides are every 2nd Saturday in the month, so April 11th, May 9th, June 13th and July 11th are the next four. These rides are aimed at less confident cyclists who would like to learn some local routes. Usually about 12 people turn up for a friendly ride of about nine miles on mostly quiet roads and paths. A great way to familiarise yourself with the routes, discover new places, plus get to meet your neighbours. There are also a few longer “Healthy Ride+” rides on the 3rd Saturday each month and these frequently start from Canada Water as well.

There is an excellent bike department at Decathlon, including a repair station that is likely to grow given the extension of the building. Unfortunately the only other cycle shop in SE16, Robinsons recently closed.
Storage for bicycles can sometimes be an issue for those residing in apartments or shared buidlings. However, there are options such as bike hangers or lockers. You may have seen one of these in the Rotherhithe Street behind the Brunel Museum. 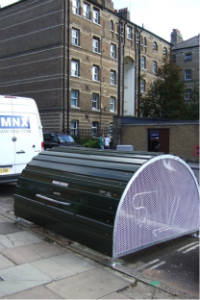 Southwark Council has started installing a number of bike hangers and lockers across the borough. Many of the residents who first asked for them were not active cyclists but said that they would cycle if only they had a safe place to keep a bike. A space can be rented from the council at a moderate rate of £30 a year. Find your nearest hanger here. You can also ask the council to install one nearby if you can show the demand. To find out how to do this, a very useful guide can be downloaded from Southwark Cyclists website here.

No excuse now for me not to get out on a bike!

To find your route around the city, try the excellent series of 14 TfL Cycling Guides. They are available from TfL Travel Information Centres, via the 24-hour travel information service on 0343 222 1234, for order online here and from some bike shops. No 7 covers SE16 most comprehensively.