Ed has been one of the best known of our local artists for some years now. Born in Putney and now based in Rotherhithe, Ed is increasingly recognised as one of the great contemporary painters of London and Londoners. Ed’s paintings are large in scale and figurative developed from the real life encounters he records with sketchbook and pencil. But they are also deeply symbolic and almost mythological in their complex allusions and references. Inspired by Hogarth’s street scenes and Bruegel’s insights into ordinary life, London is Ed’s great muse. I met up with him at The Mayflower pub and began by asking how he got into a career as an artist. 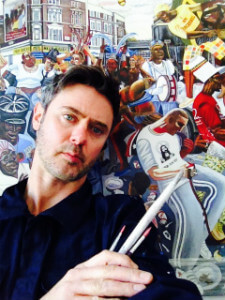 “I suppose I knew from early on that I wanted to be an artist,” explained Ed. “I studied fine art at Wimbledon and Cardiff University. I returned to London and settled in a squat on the Old Kent Road. I volunteered in youth work and worked as a guard at the National History Museum, all the time painting at home. Then in 1998 I trained to be an art teacher and got a job in a Peckham secondary school. In 2001 I was lucky enough to be awarded a sabbatical from my school job to complete a Fellowship residency for the Masterworks Foundation of Bermuda. I held two successful Bermudian exhibitions and took a painting trip through Central America. When I got back to London, I got a studio on the Old Kent Road (again!) and began showing my work in Camberwell. I got support from Mark Dodds at the Sun and Doves in Coldharbour Lane, now trading as The Sun. It was then I went self-employed!”

“…get out there and build your network. It’s a balance of course but you need exposure alongside the ability to create something that connects with people…” 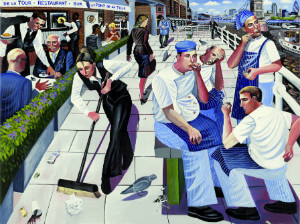 In 2003, Ed was recruited as the Education Officer for the Camberwell Arts Festival. He stayed with the annual arts week and open studio programme for two years. He went on to be resident artist at the Charles Edward Brooke school in Camberwell. “Basically,” said Ed, “I had to decide whether I wanted to be a good teacher or a good artist – and the art won out. I’d just taken on a share of a mortgage with my new wife and a good friend, who was also self-employed. It was a risky move to go self-employed at that moment but I knew it had to be one thing or the other. It brought pressures certainly. I had to keep on being creative whilst producing work that was authentic and credible. It was also exciting as it built on my previous experience. It wasn’t as though I was new to the art scene or hadn’t already tried my hand at key parts of being self-employed.”

‘My paintings begin in the shadows where I stand sketching people in the streets. These drawings then shape shift onto canvas as drawings made with clouds of dusty charcoal and chalk and old London stock brick that I pick up on the Thames shore. I build up a sediment of paint to tell stories about the layers of people that I sketch in the streets and fill my sketch books with, unearthing mythology and folklore to create a rich mix. I hope that mix leads me closer to the spirit of the scenes that I see, towards the truth of my experience in this impossible task to document the soul of a city- to document Londonessence. And I hope that truth reverberates with the spirit of the people that inspire me- the people of the great unknowable microcosm that is, and always has been, London’. 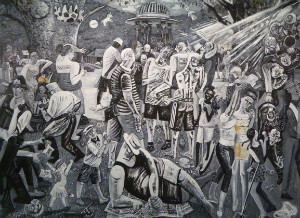 Adoration of the Cockney Rebels, Bermondsey Carnival (Memory of a Free Festival)

Discovering your own voice

Ed saw a growing appetite for his work. By 2005, his paintings began to sell regularly, both as originals and as prints. He settled on working with the GX Gallery on Denmark Hill SE5 and early on began using his links with both the Dulwich Picture Gallery and Tate Modern to give workshops. Combining his experience as a teacher with his professional skills as an artist, Ed’s talks became increasingly popular. “I became more confident in my own messages,” comments Ed. He continues to work in schools and colleges as a visiting artist; this summer he’s been working with St Mary Magdalene Primary School in Peckham for ten weeks. For a while in 2010, he employed someone to handle his social media presence but it didn’t really work out. “It just wasn’t my voice,” explained Ed. “But it was great in opening up new spaces for my work to be seen and understood.” 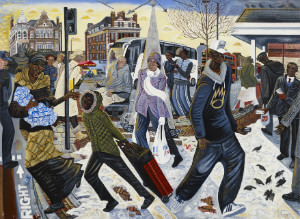 So what advice does Ed have for creatives setting out on the road to self-employment? “When you start out, have a second income to buffer yourself for a while. I went part-time teaching at first and that helped give me the time to create a body of work to sell. Go to the free lectures for those newly self-employed on things like tax and insurance; you need to get the key legal things sorted early on. Be in the business of communication. Don’t just shut yourself away to be creative; get out there and build your network. It’s a balance of course but you need exposure alongside the ability to create something that connects with people.  Finally use the Internet well. You need to take an interest in the folk who are buying your work so get to know them in person and online.” 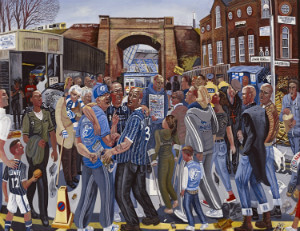 Adoration at the Lion’s Den ‘Matchday at Millwall’ 2014

“It’s great being part of Rotherhithe since 2010,” says Ed. “We bought a flat on an estate by the river and it’s proved a true antidote to the stress of the city. I often go walking along the river and when I’ve time will walk into town. The area is an urban idyll in some ways with lots of contact with neighbours and the kids play safely outside. My exhibition Dust and Shadows: Londonessence at Rich Mix Bethnal Green reflects local features like the Thomas á Becket on the Old Kent Road and the Bermondsey Carnival. We’d love to stay in the area but our growing family makes that difficult. I just hope the Canada Water Masterplan includes plenty of family homes at affordable prices else we will certainly have to go elsewhere. I was teaching recently and covered the tables with the Evening Standard to keep them clear of paint; I was reflecting though on the contrast between the prices on the property pages and the experience of the children painting on them. There is a stark division there!”