­
Previous Next
Family History in SE16

Given the huge numbers of people who have lived and worked in SE16 through the centuries, there is no surprise in the interest this area has for people seeking their family history. Of course there are many valuable resources online today that makes the often fragile paper records available to millions at the click of a mouse. However it takes determination and persistence to develop a thorough picture of your family’s past. Toby Sutton-Long has such qualities and for a young man of only 12 years has accumulated a superb account of his heritage. Here is a summary of his family links with Rotherhithe. 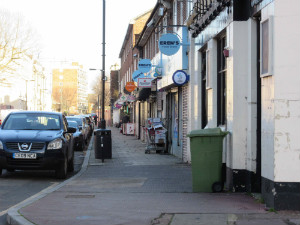 Rotherhithe has been in my maternal grandmother’s family for 222 years.

The first connection that my family has had with Rotherhithe was when Mary Ann Knight was baptised at St. Mary’s Church on 15 December 1793. Her parents were James and Mary Knight. In the 1851 census, Mary Ann’s place of birth is recorded as Rotherhithe. Mary Knight married David Lambert on 22 November 1812 at St. Dunstan’s Church in Stepney. The 1841 census states that Mary Ann and family were living in Hope Inn in Ware, Herts. They had eleven children. By 1851, Mary Ann was living with her fifth eldest child, Joseph Lambert at the Jolly Coopers pub in Clerkenwell.

David Lambert was a waterman/barge-owner and innkeeper. He was an innkeeper at the King’s Head in Ware and at the Cock in Amwell End, Herts.

The family moved back to Rotherhithe when James Lambert, David’s second eldest child moved there in 1852. He worked as a corn porter and lived in Clarence Street. His daughter Betsey ran a chandler’s shop on Albion Street in the late 1800s (years not known). She owned property in Rotherhithe and died in 1919. Her husband, James Harvey Moore – a shipwright – died after a dock accident; they had seven children. 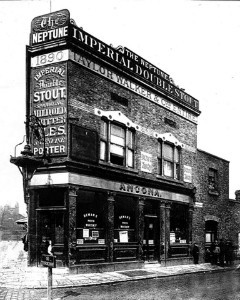 Betsey’s brother George moved to Australia in 1872, where he was twice Mayor of Broken Hill in 1895 and 1898. On moving back to Rotherhithe, he donated his case of mineral specimens to Rotherhithe Public Library; they – like much else in the collection – were sadly destroyed in the Blitz. He then went to work on as a lighterman.

“…The Rotherhithe Christmas Market has become an annual tradition in our family (even though the last was the coldest day of my life)..”

David Lambert (not Mary Ann’s husband) was married to Eliza Ancona. Their nephew Thomas Ancona lived on Rotherhithe Street and ran first the Rodney’s Head and then The Neptune pub (both of which have now been knocked down). 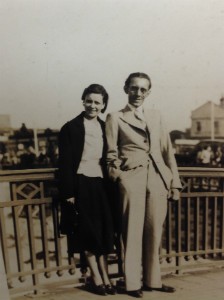 She grew up at 13 Sandwich House, Swan Road. She lived there until she married my great-grandfather William Robert Day in 1940 at the Church of the Most Holy Trinity, Bermondsey. They met working at Shuttleworth’s Chocolate Factory and moved to live in Catford. This was my last direct connection with Rotherhithe.

In 2012, my parents and I went to the Rotherhithe Christmas Market. Over the past few years, myself, my mother, my grandmother, and even my grandfather have been involved in the area, looking at places long ago relatives have lived or been connected with and discovering some favourite places of our own: Stave Hill, Sands Film Studio, the Mayflower pub, the Salter Statues (in fact, at the time of writing, myself and my mother are going tomorrow to photo-scout for this article). The Rotherhithe Christmas Market has become an annual tradition in our family (even though the last was the coldest day of my life), and I am looking forward to more Rotherhithe, (and Bermondsey) exploration in the future!

If you want to find out more about your family history, there are many online and archive sources to look through. Here is a small selection of the best for UK genealogy:
genesreunited.co.uk
ancestry.co.uk
ukbmd.org.uk