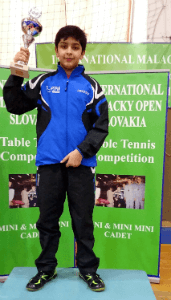 Aadil Anand winning the U11 European Championships in Slovakia

“Only in mid-March, our junior player Aadil Anand won the U-11 singles crown at the Slovak Open Malacky – Mini & Mini Mini Cadets European Championship,” explains John Dennison of Fusion Table Tennis. “He won the title for India in a field of 46 players from 9 countries. The final was fiercely contested and Aadil came from 2-1 down to win 3-2 against a strong Romanian player, Paul Szilagy.”

“…we are… a community club that welcomes everyone, regardless of age, ability or background. The club aims to be very social, bringing members together for a summer picnic and Christmas party each year…” 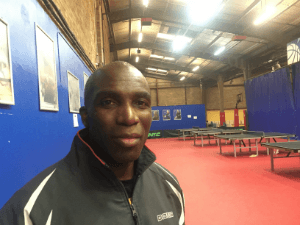 John Dennison in the Fusion TTC

Success at the table

John met me at Fusion Table Tennis Club centre in Stockholm Road, in the shadow of Millwall’s ground, the Den. We sat down over a cuppa and I asked him about his own experience as a player and coach. “It all reaches well back to my childhood,” John said. “Whilst I played at school, I only realised that I wanted to make table tennis a serious career when I reached 17. I made real strides from then on and won national competitions, ranking in the top 30 at my peak. I’m proud to say I represented Jamaica in the Commonwealth Games but now I spend less time playing and much more coaching. I’ve been with the club for getting on for 15 years now I suppose.”

Moving on and growing

The club emerged from three Dulwich table tennis groups in 1989 and has been housed at three different Southwark schools over the decades since then. Since April 2014, with help from developers Renewal – regenerating ‘New Bermondsey’ to the very south of SE16 in Lewisham – Fusion have taken up space in a former warehouse sharing facilities with the Lewisham Thunder Basketball Club. The huge new space has offered the club real opportunities to branch out and become one of the largest clubs in London. With dedicated space and fourteen permanent tables together with raked seating for 200, the club is well placed to become a regional centre of excellence.

“… As we grow in numbers, so we can provide better opportunities for the sportspeople to excel and help the club flourish as a friendly community made up of all sorts…”

A Club for all

But John is insistent. “We are about bringing on the very best talent and giving them the absolute best chance of succeeding in table tennis. But we are also a community club that welcomes everyone, regardless of age, ability or background. The club aims to be very social, bringing members together for a summer picnic and Christmas party each year. We encourage everyone to have fun in a structured environment where anyone can feel at home. Whilst we may get 50 or 60 players of all types turn up on a Saturday, we make sure people get individual attention and help to make the best of the opportunities at the club.” 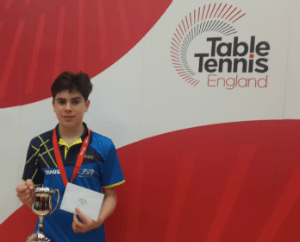 Our members, our future

John is one part of the executive committee who ensure things run smoothly. His fellow committee members are Martin who thought the club up in the first place and Des who as a Surrey Quays girl feels really at home in Bermondsey! They help organise the home and away fixtures for the many teams who play regularly as part of the local, national and British leagues. They are also crucial to keeping the money rolling in. “We are deeply grateful for the sponsorships, grants and loans the club has received over the years – and we are always looking to make new friends in that way. But our focus is on our membership; they are our future. As we grow in numbers, so we can provide better opportunities for the sportspeople to excel and help the club flourish as a friendly community made up of all sorts. The future lies with our members; they are our lifeblood.”

Find out more by visiting the club. Introduce yourself and have a go at whatever level you want to start. Membership fees depend on what you want to do. The day rate is £5 and a monthly subscription starts from £25. Visit the website for more about the club, opening times and other details.

The next training camp will be held over the Easter weekend (26-28 March) at the Club when you can get some serious coaching and really improve your game in only a few days. Get in touch with John now to book your place.