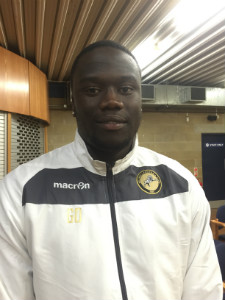 How do you make your way in football? Lots of young people in SE16 have dreams of joining the elite in the Premier League and performing their magic in front of thousands each week. The work of Millwall Premier League Kicks – and its Southwark and Lambeth manager Gerry Otim – is to build the potential of those aspiring footballers into our local grassroots football. The importance of engaging young people in sport has never been better understood and we have an amazingly successful programme working here in SE16.

“…Adam Laurence who opened my eyes to what a coach can be. He brought so much experience of the game and combined it with quality delivery and a depth of social skills…”

Meeting Gerry at the Lions Centre next to the Den – headquarters of the Millwall Community Trust, we found a quiet spot and talked about his own journey with football. “It all started with an offer of free football when I was about eleven,” recalls Gerry. “Richard [White] was just starting up Kicks in Rotherhithe and Peckham and got me and my mates involved on Monday and Friday evenings. I was soon getting coaching on Saturday mornings from Steve Rogers as well and I joined the team at Redriff that played on Wednesdays too. Benny Troy was the lead coach there and offered me some sessions refereeing and coaching; to do that I needed to get qualified and Millwall paid for me to get my FA Level 1 Award in Coaching Football.” 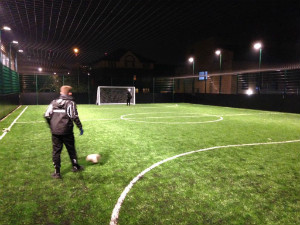 “By the age of 16, I was getting bits of coaching work from Richard and so it was easy to move into being employed as a casual coach. By that time, I’d realised I wouldn’t make it as a footballer and doing my A Levels at St Francis Xavier Sixth Form College – English, History and Media since you ask! – I could also help out at Millwall and get paid as a Recreational Assistant. I was also privileged to work with Adam Laurence who opened my eyes to what a coach can be. He brought so much experience of the game and combined it with quality delivery and a depth of social skills. He still inspires me today!”

“…Over all the time I’ve been with Millwall and despite our reputation, I’ve never faced any racism or prejudice…” 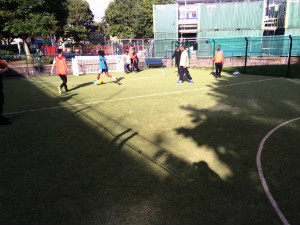 “At 18, I got a place at De Montfort University reading Journalism and Media. That didn’t mean I stopped my involvement with Kicks! In 2012-13, Tom Rolt – who was then the Kicks project manager for Southwark – made me lead coach! In my second and third years I commuted between Bermondsey and Leicester, working as a coach at weekends and half term as well as over the summer. I came to realise that I wanted to make football coaching my career and so managed to graduate this summer from university with a 2:1 degree and achieved my FA Level 2 Award in August. The summer brought loads of staff changes at the Trust and when the Southwark job came up, I put in an application. I’m pleased to say I now manage the best Kicks project in the country!” 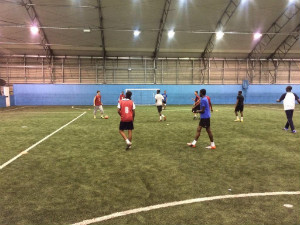 “Kicks is a national scheme to encourage young people to engage with sport and it’s run by and part-funded through the Premier League. We also have the support of the police and local authority. As part of the Millwall Community Trust, we currently run three sessions in SE16 – the largest by far is Rotherhithe Kicks (Fridays 18:00-21:00) for 14-18 year olds at our own Lions Centre. We get anything up to a hundred each week and we often play 6-a-side. At Dockland Settlements in Salter Road, we run a coaching session for 12-16 year olds (Fridays 19:00-20:30) which is less busy and there we can really focus on developing talent through 5-a-side. On Saturday late afternoons, our session at Canute Gardens near the Silwood estate runs 17:00-18:30 where we play 5-a-side with up to 30 participants.” 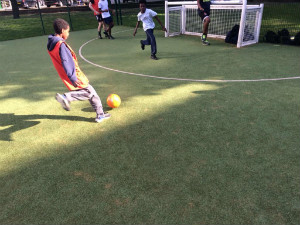 “But Millwall Premier League Kicks is more than just the coaching and match-play. We take the young people out to other grounds and to the Den itself. We run workshops on important themes like knife crime and stop-and-search. We hold tournaments and soccer schools during the holidays and we encourage scouts from the Millwall Academy to visit every so often. Our goal is to keep young people who show footballing talent in the area. If they are not quite ready for the Academy, then we can help them join up elsewhere, perhaps with Fisher FC or a Sunday League club. And of course they can take the same route as I did and learn to be a coach through taking the Awards and working for a coaching diploma.”

A passion for the game

“I’ve always lived round here and I still coach five times a week. Over all the time I’ve been with Millwall and despite our reputation, I’ve never faced any racism or prejudice; the club has always been welcoming and friendly. I love working with the young people and my love of football is undiminished. I still play a match each Friday but more time than I’d like has to be spent in the office, keeping the sessions staffed and building relationships for the future. It’s a job I love and it gives me real satisfaction that I can play a part in the future of Rotherhithe and Bermondsey through working with the young people today.”