­
Previous Next
The Great Dock Strike 1889

We are pleased to welcome Patricia Dark Borough Archivist as our contributor today. She introduces the impact of the Great Dock Strike of 1889. 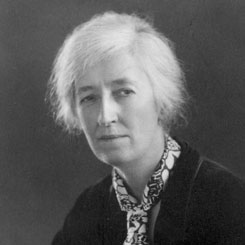 Bermondsey and Rotherhithe recently celebrated the 150th anniversary of Ada Brown Salter’s birth. Ada was a pioneer and a revolutionary; she and her husband Dr Alfred Salter were a driving force behind the ‘Bermondsey Revolution’ that transformed SE16 in the interwar years. The Salters were however part of a wider movement for change in the dock communities that started over a few weeks in the summer of 1889: the Great Dock Strike. Both Alfred and Ada had strong links with the trade unions that emerged from the Great Strike and their fierce support and organisation made the Revolution possible. 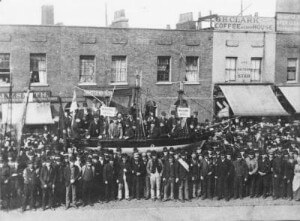 Procession of dock strikers at East India Dock Road; they marched into the City for a rally

In the late 1880s, work on the riverfront – split between eight different principal docks and a large number of private wharf companies – was highly segregated and very hierarchical. At the top were the permanent staff of the wharves and docks. They numbered not much more than a thousand in total. For the most part, these men had office or supervisory jobs, or specialist skills needed to keep the dock and its machinery running. In some docks, permanent quay or warehouse foremen hired labourers directly, as did the wharf companies; in other docks, providing labour was left to contractors, many of whom were highly exploitative.

“…Three children died from “want of breast milk”. There were also 4 deaths from rickets (vitamin D deficiency), 21 from atrophy, debility or wasting (likely to be related to malnutrition), 32 from inanition (starvation), and 27 from marasmus (severe malnutrition)…”

Skilled workers such as stevedores, who loaded cargo onto outgoing ships, and lightermen – who loaded and piloted the Thames barges that shuttled cargo around the docks, wharves, and ships – were at the top of the labour tree. Their work was very physically strenuous, and these men were out in all weather but both roles were regulated. Lightermen had their own Company and were apprenticed for 7 years. As a result, these relatively small groups got higher pay and some degree of job security; in fact, by 1889, the stevedores were already unionised. 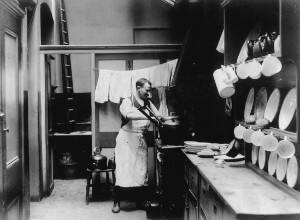 Casuals with no security

However, most of the dockers on SE16’s riverside were casual labourers who unloaded cargo from ships and put it into warehouses. Huge numbers were able to do such work without a union to represent them. As Beatrice Webb wrote in Life and Labour of the People in London, it was ‘…work that any mortal possessed of will and sinew can undertake’: lifting and hauling goods out of ships and into warehouses, then stacking it to await retail repackaging. A constant refrain of reformers was that men were too old for this work at forty.

But the hard, grindingly repetitive physical labour was compounded by the fact that most labourers were hired on a day-to-day basis for a mere pittance of a wage. (Foremen gave preferential work access to a small number of ‘royals’ or ‘ticket men’ as they were known.) Before the Great Dock Strike, as R.B. Oram notes in his book The Dockers’ Tragedy, foremen could take on casuals for as little as half an hour at a time. Their pay was hard to calculate; Oram notes that the standard in the East and West India Docks was 5d (2p) per hour, while Beatrice Webb notes a wage of 3s 6d (17.5p) per day. A ticket man could earn 15s (75p) to £1 a week – at the high end, about enough to stay out of poverty, barring disaster. A hardworking, non-royal casual might earn 12s to 15s (5p to 6.5p) a week – but that wage depended on weather, tides, and cargoes. Even if it was regular, it was not enough to stay out of poverty, and nowhere enough to support a family in the squalid housing and health conditions of the docks. Casuals would tramp round the docks for hours, looking for foremen seeking work or for food. Men were often forced to pick through garbage to find something to eat; without work, they couldn’t buy the food they needed to do hard labour. Prosperity, for a dock family of the time, was a frying pan; a full day’s wage meant hot food for once.

“…On 24 August, the largest procession, from Poplar Town Hall to the City of London, captured the sympathy of the capital – as well as much-needed funds for welfare relief…” 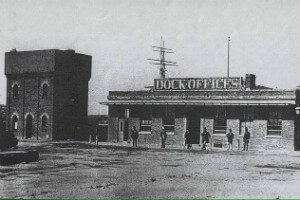 Being available for work

The ‘call-on’ – where available dockers gathered to be chosen to work – was equally brutal; Jack Jones writes in On the River: Memories of a Working River that men – even in his days as a docker, decades after the Great Dock Strike – would be herded into ‘the cage’ each morning. Physical fights were common, and Ben Tillett – one of the leaders of the Great Dock Strike – wrote that men could lose ears, or be crushed to death, in the frantic struggle to catch a foreman’s eye. For the Surrey Commercial Docks, the call-on happened daily on Redriff Road near Lower Road, come rain or shine.

The Medical Officer of Health (MOH) reports for Bermondsey and Rotherhithe show us what could happen to dock families. Rotherhithe’s MOH report for the year of the strike notes that one of the parish’s inquests into deaths returned a verdict of ‘inanition’ or starvation. Bermondsey’s report from 1887, two years before the strike, is more detailed. Three children died from “want of breast milk”. There were also 4 deaths from rickets (vitamin D deficiency), 21 from atrophy, debility or wasting (likely to be related to malnutrition), 32 from inanition (starvation), and 27 from marasmus (severe malnutrition). 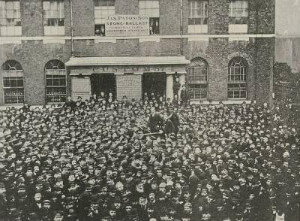 Finally, by the summer of 1889, the dock labourers – as Ben Tillett, the respectful term for them was “the submerged” – had reached breaking point. In July 1888, matchworkers at Bryant & May – mostly women, similarly poorly-paid, similarly unskilled, working with toxic white phosphorus, and sacked if they contracted ‘phossy jaw’ at work – went on strike for two weeks to draw attention to their appalling working conditions. Their noisy pickets and public marches were a success, and the newly-formed Union of Women Matchworkers was the first female union in the country.

“…All the strikers’ pay and time demands were met and the contract system was abolished. But maybe more importantly, the Great Dock Strike showed what a united working-class community could achieve…” 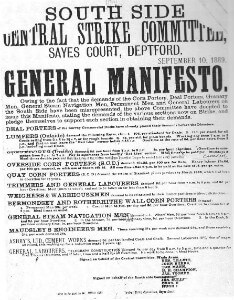 Bryant & May’s workers lived cheek-by-jowl with the dockers; their success proved that unskilled workers could improve their working conditions by providing a determined, organised, united front to management. The Great Dock Strike started in West India Dock on 12 August 1889, after the gang and the dock superintendent clashed over the amount of bonus money due for unloading the Lady Armstrong. Never before had unskilled workers stood together for change. The strikers demanded base pay rise by 1d to 6d (2.5p, the famous ‘Docker’s Tanner’), overtime pay of 8d (3.33p) per hour, and a minimum employment period of four hours.

On 16 August, Ben Tillett led 10,000 men in a march round the docks; two days later the stevedores joined the strike, while the men of the Surrey Docks joined on 20 August. On 24 August, the largest procession, from Poplar Town Hall to the City of London, captured the sympathy of the capital – as well as much-needed funds for welfare relief. By the end of the month, The Times noted that London’s overseas trade was totally paralysed. It was however becoming increasingly obvious that the dock owners meant to starve the strikers into submission. Butler’s Wharf in Bermondsey began independent negotiations with the strikers late in August; £30,000 sent from Australia allowed the strike to continue into September. Cardinal Manning, RC Archbishop of Westminster – known to Dockers as ‘the honest broker’ – was instrumental in negotiating an agreement, which was signed on 14 September 1889. All the strikers’ pay and time demands were met and the contract system was abolished. But maybe more importantly, the Great Dock Strike showed what a united working-class community could achieve, and what impact working people could have in the political sphere. That experience was vital for the Bermondsey Revolution to succeed.