Home Help to the World

­
Previous Next
Home Help to the World 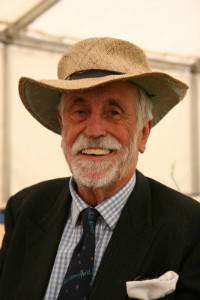 By Seven Islands Leisure Centre is a short road that leads down to the gates of Southwark Park. The road is called Gomm Road and half way down on the wall of a modest terraced house is a blue plaque to Richard Carr-Gomm, founder of Abbeyfield and the Carr-Gomm Society. Who was this man? Why is he remembered in this fashion?

Richard Carr-Gomm was born into relative privilege and studied at Stowe School and won a place at Oriel College, Oxford. However, he turned down the route to further study and instead chose the life of a soldier, enlisting first in 1939 with the Royal Berkshires and then in 1941 joining the Coldstream Guards. He was part of the Normandy landings and drove a Churchill tank to the gates of Belsen, when the concentration camp was liberated. He was mentioned in dispatches and awarded the Croix de Guerre. In Palestine, he became a captain and travelled through Italy without any evident support, begging his way up the country. This experience and the preaching of Billy Graham combined to change his life entirely and to give up his army life.

“…Richard Carr-Gomm is a man to be remembered especially in Bermondsey as the founder of a global movement for care and consolation for older and lonely people….”

In December 1955, Capt Carr-Gomm aged 34 moved to that modest terraced house in Bermondsey and became the first male home help. He took in two local elderly residents who needed his care and in the next year or so, with the help of volunteer supporters purchased a further five houses for the same purpose. He took in a range of older people over subsequent years and his ideas spread the movement to many parts of London. The different expressions of his ideals came together to form the Abbeyfield Society which to this day offers comfort and a home to lonely and isolated elderly people in sixteen countries around the world. 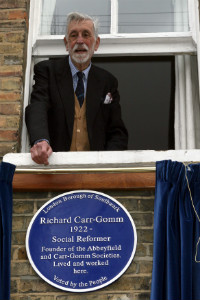 Later in life, in 1965 he founded the Carr-Gomm Society and the Morpeth Society in 1972. Ever busy building a movement to create companionship for the lonely and elderly, Richard Carr-Gomm was honoured with a OBE in 1985 and was awarded the Beacon prize in 2005. In that same year, the Pride of Britain Awards gave him a Lifetime Achievement Award and in April 2006, he unveiled the plaque at 50 Eugenia Road (now renamed Gomm Road) to his achievements. He died in 2008. Richard Carr-Gomm is a man to be remembered especially in Bermondsey as the founder of a global movement for care and consolation for older and lonely people.