The origins of London Bubble lie not in Rotherhithe but in Kentish Town! London Arts set up the company to tour theatre around the outer boroughs, delivering Ibsen and Shakespeare in drafty church halls. By the mid-1980s when it moved home to Rotherhithe London Bubble was touring in it’s own enormous tent that sucked up most of the budget in the summer months. Twenty-six years ago, Jonathan Petherbridge was appointed as Artistic Director, taking the reins at a critical time for the company. 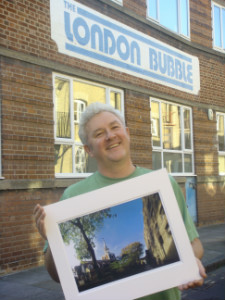 “I’d been artistic director in York and after that had worked at a community project in Birmingham. I arrived at the Bubble at a time when it was in need of a clear direction and we took the decision early on to no longer make the tent the centre of our life and to build a range of additional projects and ventures that would give us greater reach and impact. We started using promenade methods asking our audience to stand and walk with the performers, using spaces that were not built for theatre. Over the following seventeen years, we diversified our work and built a strong reputation as a company for the local community.”

“…In August 2015, the script was performed in Tokyo and Hiroshima itself. We hope to take it to New York this year for a bi-lingual performance there…”

“But the Arts Council was faced with huge cuts to their budget in 2007 and along with the economic crash, we faced a withdrawal of 65% of our funding at three months notice; it was a reduction of £420,000 almost overnight. Bubble hardly survived at the time! We had to make people redundant and moved several key posts to part-time. It was a very painful time. But without the involvement of the Arts Council, we have been steadily rebuilding ourselves since then and over the last seven years, London Bubble has emerged lighter and more creative. The change has made us focus on the most important aspects of our work and to ensure we are at the forefront of community theatre and at the centre of this community.” 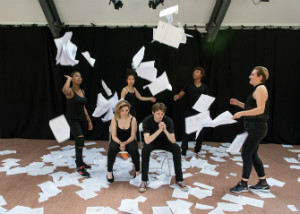 “Today we are involved in many projects aimed to provide participants with that amazing creative process of being part of theatre rather than a passive consumer. We give people a chance to play, to make connections and to perform, all in aid of their growing as people. We see our building more as a hub to help people be creative than a traditional theatre space. I love to use the analogue of foraging for food. We start by bringing to together the ingredients from research, people’s own stories and from the setting. We mix them together following a recipe that can be helped by a professional storyteller. And then we can feast on the resulting performance with friends and family so they make the connections too. It’s collective, it’s authentic to the participants and it’s fun!”

“…I love to use the analogue of foraging for food. We start by bringing to together the ingredients from research, people’s own stories and from the setting. We mix them together following a recipe that can be helped by a professional storyteller…”

“So for example, we work with twenty unemployed young people aged 16 to 25 years old giving them the tools to run a workshop with their peers. They take the lead in sessions in several schools called ‘We need to act on’. The workshop poses a problem that faces the school group and then ‘audience’ members are invited to step in and take a character for a time, working out their route to a solution to the problem. These Young Theatre Makers are inspirational opening up a school class to their own experience in fresh ways.” 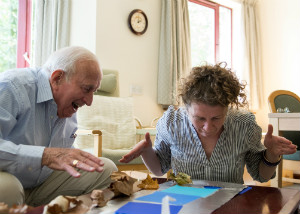 “Our inspiration for the work comes from two main people: Vivian Paley and Augusto Boal. Using Paley’s insights into the critical role of storytelling to pre-school and kindergarten children, we’ve worked for ten years on Speech Bubbles with Key Stage 1 classes encouraging the children to tell the teacher a really short story. The teacher then helps the whole class to participate in telling the story collectively. It has amazing impact on children’s academic and social growth. Now we run a Speech Bubbles social franchise with partners across the country. Augusto Boal developed the Theatre of the Oppressed in Brazil in the 1960s and today we use his insights and methods in much of our work. For example, our work in 2015 on the 70th anniversary of the bombing of Hiroshima in 1945 brought us closer to theatre companies across the world. We built a script from intergenerational interviews between today’s children of Hiroshima and survivors who were the same age when the bomb fell called Grandchildren of Hiroshima. In August 2015, the script was performed in Tokyo and Hiroshima itself. We hope to take it to New York this year for a bi-lingual performance there. We took the idea further with Hiroshima Dispersed and invited ten theatre companies across the world to read the script aloud on 6 August, the anniversary of the bomb and to join their neighbours in Hiroshima in lighting lanterns to float on their local river or lake. We changed the perception of many younger people who understood for the first time what happened to the city’s inhabitants.”

“…built a strong reputation as a company for the local community….” 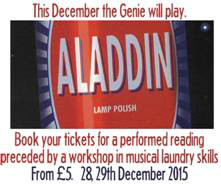 “We are looking forward to our Panto Unplugged again this year – Aladdin returns! Each year, we don’t exactly perform a panto but we hold a pre-show workshop – this time it’s in musical laundry – and then the reading of the panto takes about half an hour. We have fun and since it’s a gathering of panto lovers, it can be a light-hearted way to celebrate the holiday season. I hope we will see lots of our neighbours along once again – bring your kids and babies, everyone is welcome!”