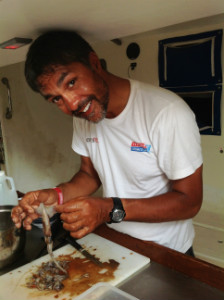 Simplicity restaurant has been an established part of Rotherhithe village for nine years. Its proprietor and chef Lawrence Lingard has also become something of a celebrity having starred in two TV series about his round-the-world Clipper race in 2013. Lawrence hails from Manchester and moved down to London some 20 years ago. He came to Rotherhithe when finally he negotiated a lease on a derelict property in 2006 and has since turned it into a great place to eat and socialise. His motto is that the food should be Simplicity itself!

What makes you who you are? 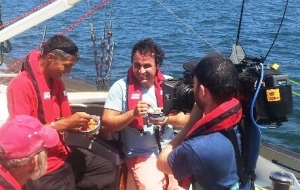 We sat down at the window in the restaurant and I asked about Lawrence’s background. ‘My family roots lie in India but my parents met in Kenya. From there we ended up in Manchester where my mother and grandmother would create the most amazing banquets from nothing. When I left school, I went on to run a hotel in Blackpool and a restaurant in Altringham. I’d already found success at cross-country whilst at school and tried out boxing to get fit. I caught the bug and when I finally came down to live in Borough, I boxed light welterweight at Billy Knight’s gym for Terry Edwards. Billy represented England at the 1974 Olympics and Terry was behind the success of the team at the Beijing Olympics. I boxed for London in the end but at 29 I took up triathlon and completed two Iron Man triathlons in Austria (2005) and New Zealand (2006); that’s a 2.4 mile swim, a 112 mile bike ride and a full marathon 26.2 mile run, raced in that order and without a break. So racing round the world in the Clipper Qingdao in 2013 wasn’t completely out of the blue; I like a challenge!’

Tell me about Simplicity. How did it come about and what are you aiming to do? 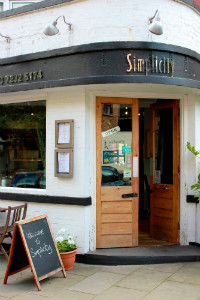 ‘The place has a heritage as the Rogues Café serving Cajun food to dockers. Then Ray Bayliss took it over as Le Maison Rouge and painted pink! When that finished, the place was abandoned and squatted for four years before I took it on. We’ve never had our own electricity supply so I’ve had to rig up a solution. I just wanted to create a place of Simplicity where you can enjoy a relaxed meal with your friends or take your partner out for a celebration. In 2008, we were on Local Food Heroes with Gary Rhodes and we managed to win the London final and came third nationally. I cooked slow roast pork belly with meat from Surrey Docks Farm on the show and ever since I’ve had to keep it on the menu because people ask after it!

It’s really, really slowly cooked. First we remove any bones and clean the ribs of meat. The bones make a stock and we make a forcemeat stuffing with the meat and our secret recipe. With the deboned pork, we score the skin and leave it to marinade for 24 hours. Then we roll and tie the pork into shape before gently cooking it for around 4-6 hours. Then we leave it to rest for another day before it’s ready to use in the restaurant. Even in the summer months, it’s irresistible…

Simplicity is a local community restaurant. We have great links with our neighbours at the Brunel Museum, Sands Films, The Midnight Apothecary and The Ship in Rotherhithe village. I think the place is as important as the food. We’ve invested with Time and Talents in keeping our gardens well-tended and use some of the herbs in the kitchen. We always cook every dish to order and as we are quite compact – with only 44 covers – it’s really important – particularly with groups – to book in advance so we can stagger the cooking and give everyone a good experience’

“…the food should be Simplicity itself!…”

So what are your plans for Simplicity in future? 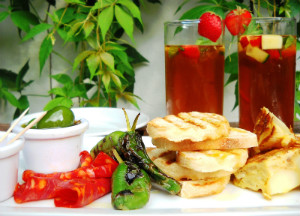 ‘The place is small and intimate so our plans are to scale. It’s a place where you can enjoy a relaxed meal with your friends or take your partner out for a celebration. We’ve Pimm’s and Tapas evenings Sunday-Thursday, a reminder of our British/Spanish holidays. In October or early November, we will hold our first wine-tasting dinner for two years after much cajoling from our guests; in previous years they’ve proved hugely popular. Then it will be December and the beginning of the party season. A time to be merry and share good times with friends and family. We’re thinking about the perfect vegetarian Christmas menu … as another adventure! 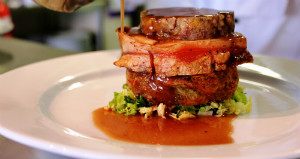 Find Lawrence on TV in Clipper Round the World and The Race of their Lives
More details of Lawrence’s race via 15 worldwide stops on five continents can be found at clipperroundtheworld.com