­
Previous Next
The Lion’s History – Roaring from the Den

Today we welcome Dr Patricia Dark the Borough Archivist as our guest blogger on the road to SE16 taken by Millwall Football Club. 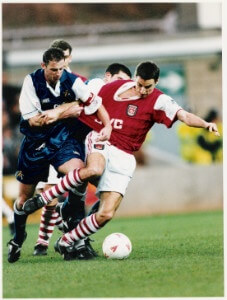 I may as well come clean before I begin: I’m a Yank. And I’m not very big into sports – the only pro sport I make an effort to watch live is ice hockey (sorry, I mean hockey). So pretty much by default, I don’t understand football. And I mean all kinds of football; Simon Inglis’s ‘Played in London‘ (published by English Heritage 2014) comments that you can watch up to nine different types in the area around the capital: Association, Rugbies League and Union, Gaelic, American (or gridiron, the kind I call “football”), Australian rules, two forms played at Eton, and one form played at Harrow!

That’s hard enough to suss out! Trying to wrap my head around the place Millwall has in the life of SE16 sometimes feels almost impossible. A quick look at the Southwark News shows recent stories about the wedding of Millwall fans Chris Preete and Sue Keegan (25 Feb 2016) – where their registry office appearance preceded their on-field appearance during half-time at the Den against Peterborough United – and of course, the arrival into the world of little Bermondsey Millwall Den Bloomfield (19 Nov 2015). The former might happen in my hometown, but not the latter!

“…In fact, the Old Den changed the sport forever – it was where the Millwall Roar was born…” 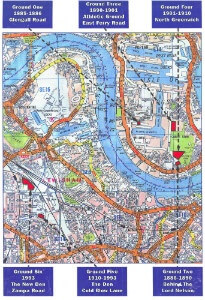 Millwall FC’s history – British History Online’s Survey of London gives a very brief overview of its early years – adds another twist to the tale. Although the club is 131 years old, it has called SE16 ‘home’ for less than 25 years. Its oldest roots are firmly planted north of the river, on the Isle of Dogs: specifically, on the Westferry Road site of the Millwall factory of JT (later C&E) Morton, a Scottish canned and preserved food company that supplied Scott and Shackleton’s Antarctic expeditions and troops in World War I. 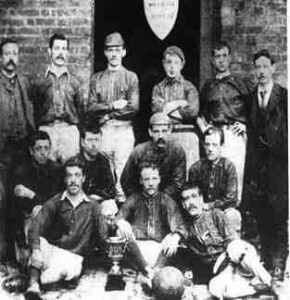 Millwall Rovers then known as the Dockers

In 1885 – fully 3 years before the Football League’s birth – sports-loving Morton’s staff – many Scottish – and other locals formed Millwall Rovers. The club’s meetings were held at the Islander pub on Tooke Street; the landlord’s 17 year old son, Jasper Sexton, was its secretary, while its first chair was Irish international footballer William Murray – who was, coincidentally, also a local GP. The first decade or so of the team’s life justified the name “Rovers”: they occupied no fewer than four pitches on the Isle of Dogs between 1885 and 1910. The first was waste ground at the west end of Tiller Road, then they moved behind the Lord Nelson pub on Manchester Road in 1886, and four years later to a site fronting the east side of East Ferry Road, near Crossharbour DLR – their name changing to Millwall Athletic with the move. They occupied their final Island home ground between 1901 and 1910: this was part of Millwall recreation ground (what we’re more likely to call Mudchute City Farm) – the Isle of Dogs Asda now occupies the site. By this time, the team had already acquired its final nickname – the Lions. 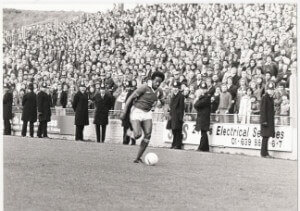 Standing at the Old Den

However, the team’s growing popularity forced yet another move, this time south of the Thames, to a site on Cold Blow Lane at New Cross. Lions supporters know it simply as The Old Den. Tom Thorne, the club’s director, engaged Archibald Leitch as architect – arguably the most influential stadium designer in history, Leitch’s other work included Twickenham, Old Trafford, Ibrox, Craven Cottage, and Tynecastle (Ibrox’s façade and the entirety of the latter two buildings are listed). It could hold approximately 4,500 seated fans and another 47,000 standing on the terraces; it was likely packed for the inaugural game, on 22 October 1910, when the Lions beat reigning Southern League champions Brighton & Hove Albion 1-0.

“…In the late 1980s, Millwall briefly broke into the top flight of football – the Old Den was simply too small for the crowds it was now attracting….” 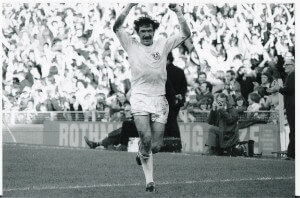 Barry Kitchener – most appearances for the club

In fact, the Old Den changed the sport forever – it was where the Millwall Roar was born. Early 20th century football etiquette demanded that spectators applaud good play by their opponents; perhaps in an early show of “nobody likes us, we don’t care”, Millwall fans refused to follow suit. Instead, their fervent, sustained support for the Lions from the first whistle to the last ensured a huge – and intimidating – home field advantage. Next door to the Old Den was New Cross Stadium, known as The Frying Pan. Originally built as an athletics stadium, it served as a training ground for Millwall; The Frying Pan also hosted greyhound racing, speedway, and cycle speedway. Perhaps some of the speedsters became Lions supporters through their interest in cycle speedway!

However, by the late 20th century the Old Den, like many football stadia, was showing its age. The Frying Pan was demolished in 1975, and by the early 1980s, as The Millwall History Files notes, tabloid newspapers tended to refer to the stadium as “Dirty Den”. Simon Inglis’s The Football Grounds of England and Wales (1983) commented that “Cold Blow Lane on a cold, wet night might be the perfect setting for a Jack the Ripper horror film.” The Millwall History Files’ description might have come straight from Lord Justice Taylor’s final report on the Hillborough disaster, in which he summed up the facilities available to ordinary fans as “…often [being] below the basic decent standard necessary to give spectators dignity, let alone comfort”. 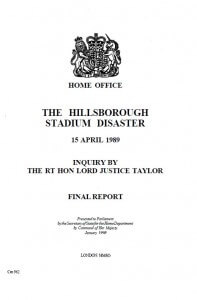 The Taylor report – and the requirement for all-seater stadia that accompanied it— overlapped with a particularly successful era for the Lions. In the late 1980s, Millwall briefly broke into the top flight of football – the Old Den was simply too small for the crowds it was now attracting. In 1990, chairman Reg Burr announced that the club would be moving to Senegal Fields SE16, just over in the London Borough of Lewisham from Bermondsey. The New Den opened in 1993, the first new stadium for a London professional team since 1937, and the first all-seater stadium built in the wake of the Taylor report.

But none of this explains why Millwall holds the place that it does in the heart of so many people in SE16. Maybe it’s because of the team’s history – a team created by workers on the London docks, that keeps a little bit of that docks history alive even after all the changes Rotherhithe and Bermondsey have seen. Maybe it’s because of family and family traditions – like wee Bermondsey and his dad, going to watch a game together, or Chris and Sue starting their married life with their beloved team. No matter where you are in the world, from Croydon to Timbuktu, being a Lions fan marks you out as a docklander – whether your family moved to the docklands 200 years or 2 weeks ago. 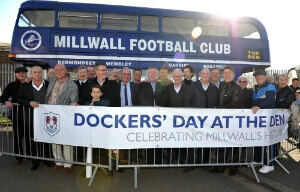 Dockers’ Day at the Den recalls the Club’s roots

But I think, looking from the outside, that it’s more than that. Not only do its fans feel like an integral part of the team (and they are), but the club feels like an integral part of its community (which it is). The Millwall Lionesses, founded in 1971, were the first women’s team to affiliate with a professional men’s team – they also founded the first Girls’ Centre of Excellence, allowing girls to develop their skills in a professional setting on par with boys. Millwall also pioneered football in the community: the Millwall Community Trust engages with young people on and off the football field, to provide them with the skills, opportunities, and motivation to stay in school and out of trouble. But Millwall also gives back in smaller but more direct ways. Southwark News (17 Mar 2016) reported players and fans attended a race night hosted by the club – and raised £2,000 for the upkeep of Albert McKenzie VC’s memorial statue in the process. The week before, Southwark News covered the fourth annual Jimmy’s Day at the club; Millwall partnered with the For Jimmy charity – founded to commemorate murdered fan Jimmy Mizen – to raise awareness of youth violence, and, this year, honoured murdered fan Tommy Blackmore. Then on 14 April, Southwark News reported, players – including captain Steve Morison – went beyond “meet and greet” by being waiters for an afternoon at the Surrey Quays Frankie and Benny’s! So maybe that’s why. Simple, really: Millwall are a beloved part of the SE16 community because they’re part of this community. Unfortunately, that means, I’m afraid, the chant is wrong: I like you, even if you don’t care!