We welcome a new contributor to the site today Irene Solombrino who introduces us to one of the hidden gems of SE16.

Put your hand up if you have ever heard of Aikido. It would be surprising to see many hands up in the air. It will also probably surprise most of us to know that there is an Aikido club in SE16, the London Aikido Dojo. Regular classes are held in Canada Water (Silverlock Tenants Hall, Warndon Street, SE16 2SB) and Sundays in London Bridge (28 Magdalen Street, SE1 2EN). 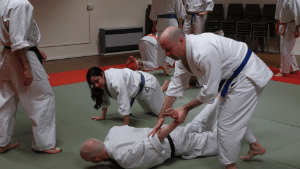 “Aikido is a Japanese Martial Art developed in the late 1920s by Ōsensei (Great Teacher) Ueshiba Morihei. Samurais use this technique when disarmed or trying to disarm,” explains Tony Evangelou, teacher and co-founder of the London Aikido Dojo club. “I started practicing when I was 15 and I have been teaching for over 25 years, 15 of which in this club. We were based in Bacon’s College Sports Centre for 12 years, then we moved to the Pumphouse Museum for a short time, now we have got one main venue at Silverlock Tenants Hall, and one in London Bridge, just off Tooley Street’. 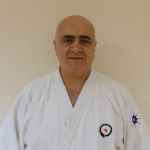 Who is Tony Evangelou then? Tony is shy, when asked about his life and his career, he almost got tongue-tied. “I started in Dublin and last August I celebrated my 40th year of aikido. Before converting to aikido, I practiced judo and karate. I enjoyed them but aikido, the art of peace, fits my personality better. In 1973, when I was practicing Judo, I broke my leg.  My karate teacher suggested I should try aikido because of its softer approach.”

The first milestone in his career as aikidoka (Aikido practitioner) and teacher was in 1987, when he became a first Dan aikido. “Dan is the measure of your expertise in many Japanese martial arts. I am a 4th Dan now and one of our teachers Robert Austin is a 6th Dan. Both of us were lucky to be taught by John Waite, who reached 8th Dan. Sadly John has now died. He was one of the ‘aikido gurus’, a teacher of teachers and a very special man who is greatly missed.”. 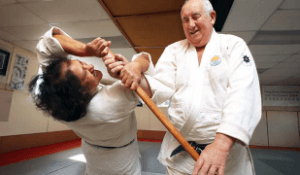 A Club for everyone

The club has got fully qualified teachers such as Robert Austin. What do club’s members think about Tony? They literally love him. “Tony is very patient and understanding. He knows everybody’s strength and weaknesses and adapts his classes according to that. You can tell he loves this sport; he tidies up the mat, the hall before and after classes. He is very funny as well.”

“…Aikido improves flexibility, endurance, coordination but leads to a state of peace of mind and relaxation as well…” 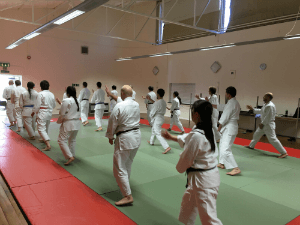 Aikido is the art of peace, the term is often translated as ‘the way of unifying (with) life energy’ or as ‘the way of harmonious spirit.’ No violence is involved on the ‘battlefield’ since the main purpose of an aikidoka is to reduce violence to a minimum by redirecting energy. An aikidoka is somebody calculating, in control and always looks for a peaceful compromise rather than engaging in a violent confrontation.

Tony explains that once you start with Aikido, you will never leave: “Although martial arts are somehow male-oriented, Aikido is suitable for men, women and children. Those who practice this discipline benefit from it not only on a physical level but mentally too. Aikido improves flexibility, endurance, coordination but leads to a state of peace of mind and relaxation as well.” 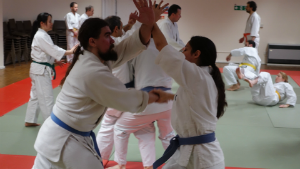 “Half the adults in the club are locals but we also have people from Brighton, Northampton and other areas of the Southeast of England. They are usually commuters who work in London and stay in the evening to practice Aikido. Unfortunately, Aikido is still a niche discipline all over the UK, with only 10,000 practitioners across the whole country.”

The club runs sessions across its two venues every single day (regular courses last 10 weeks) and it offers children sessions twice a week for as little as £3 a session. ‘”It’s our way to encourage children from any background and social class to join the club. Not only do we want more and more people to get to know Aikido but we also want to make our contribution to the community by keeping our venues safe and bringing income to the community’.

Still skeptical about Aikido? Would you like to give it a go though?