Many people will have seen wheelchair basketball on their telly during the London Olympics, perhaps for the first time. I was lucky enough to get access to watch a couple of the Olympic matches at the O2 Arena during the Para-Olympics and I was mesmerised by the skill and speed of the play. The great thing now is that anyone can enjoy that very same sport here in SE16 in the hands of one of the leading teams in the country. London All Stars are based here in Bermondsey at the Salmon Centre where they hold two sessions a week coaching and training players with the potential to reach the highest level in the sport. Ruth Eytle is their coach and she invited me along to one of the junior team sessions to see the team in action. 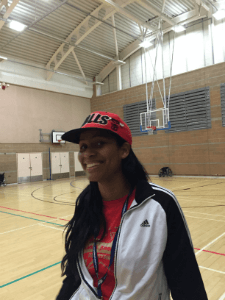 “My dream,” says Ruth ”is to see completely integrated clubs where wheelchair and regular basketball are played one alongside the other as equals. We practice all over London at loads of venues but it’s not always easy to find venues. There are so many factors to consider such as accessibility, parking, transportation and storage of wheelchairs. Once all is in place you can go ahead and start a new session! There are 33 boroughs in London; if we can get this sport in at least half, then the barriers to disability sport will be reduced.”

“The junior under-15 game in London has only two sessions a week,” explained Ruth. “That really isn’t enough to build up the next generation of players! Nonetheless, we are doing well again this year as London All Stars has reached the national finals in Worcester on 16 April. It can be hard for all sportspeople to make the time and meet the travel costs needed to compete but for those with mobility issues, the issue is far greater. Our young people are often spending £30 each way on taxis their parents can ill afford. We need to gain some sponsorship to help create that level playing field – or court in our case!” 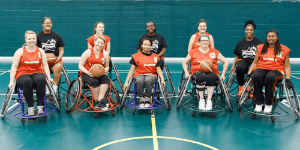 At the Salmon Youth Centre, the club uses sports wheelchairs lent to the centre by British Wheelchair Basketball (BWB). Each one costs around £1100 for a basic model and the idea is that the chairs can be returned when the club has grown sufficiently to afford their own chairs. The Lords Taverners recently gave the club five new wheelchairs which allows a greater independence for the club to grow. But the real costs lie in the court – which costs £50 an hour – and the coach. The London Borough of Southwark and London Youth pick up these revenue costs but these are always uncertain sources of funds in the current climate.

“…it’s held back by a lack of resources, in people as well as money…” 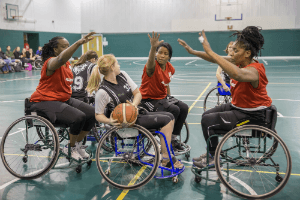 Ruth herself runs a business – Activities 4U – which aspires to create an active society where equal access and opportunity to participate in physical activity are infinite. She supports several groups of young people involved in inclusive sports but her passion is basketball. “I’ve been a coach for fifteen years and got into wheelchair basketball just before the Olympics in 2011. It gives me real satisfaction to see how a sport can include everyone and brings people together with such power.” With ten players on the court, eight baskets available and an atmosphere of serious fun and enjoyment, it was clear that Ruth has a good handle on giving youngsters confidence, a sense of purpose and building skills for life. 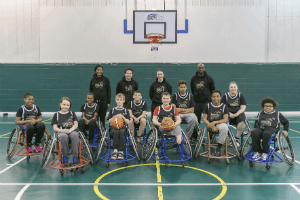 “We charge the players £2 each session but of course that goes nowhere toward meeting the club’s costs. When we play away games, we are able to use the session fees to subsidise the travel costs of one or two of the team. And since London All Stars play in three national leagues – the Under 15s, the Under 19s and the women’s – players are often away two or three times each year.” I spoke to Monica whose son Kyle is a keen member of the team. “He’s been playing for ten years now, since he was 5. The impact on Kyle – and hence the rest of the family – is tremendous. He’s so happy now and gets a buzz from being so active. Each day starts with lots of physio exercises that are so boring but in basketball, he gets a workout in a way he really likes. His brother Anton (18) is quite sporting too so Kyle can have his own competition with Anton by being good at a sport and they can both play together for once.” 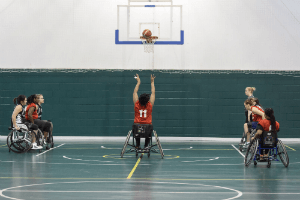 The club clearly has a bright future. Like many it’s held back by a lack of resources, in people as well as money. “We could do so much more with sponsors who could help us pay for the kit, for travel and all the small things that would make things work so much better,” says Ruth. “We need a website, we need to market ourselves properly, we need help with simple administration. Most of all we need more help to raise the money and recruit the volunteers – that would be fantastic!”

If you can help support the London All Stars, please contact
Ruth Eytle E: r.eytle@britishwheelchairbasketball.co.uk M: 07432 715 352

[Photos from BWB by SA Images; used with permission]