In 1620, a typical English merchant ship of the early 17th century called The Mayflower – like many similar cargo vessels of its day – sailed from Plymouth for America. It was not particularly well designed for Atlantic journeys as it sported a 30-foot high square aft-castle that made sailing into the wind nigh on impossible. Its companion The Speedwell had joined it from Holland in Plymouth and together they had 102 passengers and 25-30 crew. So began the famed voyage of the so-called Pilgrims or Pilgrim Fathers to form the second successful English settlement in North America at Plymouth, Massachusetts. 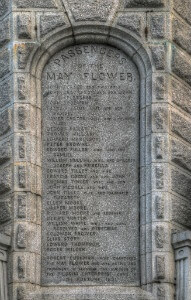 The leadership of the group came from Calvinist Dissenters who had fled from the volatile English politics of the time for a more accepting Dutch town of Leiden. Worried that they would lose their distinctive English culture, they found English investors willing to fund their colonial ambitions. Many of the Pilgrims had their origins in Nottinghamshire and had found their beliefs increasingly at odds with the social and political changes that led in the end to the English Civil War.

The Mayflower and The Speedwell set off from Plymouth on 5 August 1620 for America but almost immediately had to seek repairs in Dartmouth for a leak in the Speedwell’s hull. Two hundred miles beyond Land’s End, The Speedwell sprung another leak and disembarked all her passengers, heading home for good. The whole terrible voyage took The Mayflower more than two months until in November 1620, they sighted land at Cape Cod and after attempts to reach their intended destination further south, in late November the settlers sought a suitable site for their new home. Due to disease, exposure and poor diet, the majority of the passengers and crew died on the sea or that winter but the remainder founded a successful colony and became the iconic origins of the American nation. 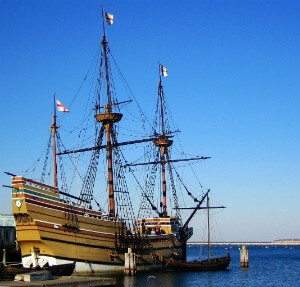 The Mayflower II – a detailed reconstruction

The master of The Mayflower Christopher Jones brought her back to London the following spring with a hold full of stones as ballast and a much-reduced crew. On 6 May 1621, he and his crew disembarked at their homeport of Rotherhithe. It was Jones’ leadership, seamanship and dedication that had made the journey possible and he died in the following March, exhausted by the effort. His grave at St Mary’s Church, Rotherhithe is still a place of pilgrimage for Americans and the local pub – formerly the Spread Eagle – was renamed The Mayflower in 1953 when the building was remodelled. Its American connections are strong and aside from the Stars and Stripes fluttering above the Thames – it’s the only pub in the UK licenced to sell US postage stamps! 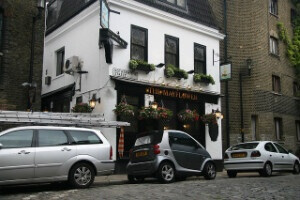 All this will be coming to a head in 2020 when we celebrate the 400th anniversary of The Mayflower’s voyage: Mayflower 400. Ambitious plans are being laid for festival events in all the thirteen locations associated with the Pilgrims, here in the UK, in Leiden and in Massachusetts. Led by the team in Plymouth, the organisers include representatives from Southwark and of course particularly from SE16. The goal of the local celebrations are threefold:

With a time to plan and deliver the celebrations, the Council is taking the local lead to bring together people from business, cultural and community in partnership. They are keen to stimulate ideas from many sources so that everyone can be involved and enjoy the commemorations in 2020.

If you want to get involved in Rotherhithe use the contact form on the Council’s website  or come along to a focus group on Monday 13 June 17:30 to 19:30 at Canada Water Library. Details here

Southwark and The Mayflower