Lottie Muir has been working as the Cocktail Gardener since 2011 but since 2012, she has established herself at the Brunel Museum running the Midnight Apothecary, an open-air cocktail bar with entertainment and food. Now she’s an author and speaker sharing her love of botanical cocktails with anyone who’ll listen! 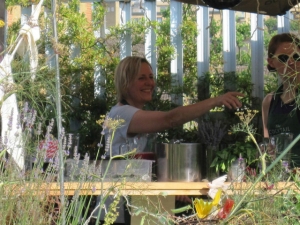 We met in the café at Canada Water Library and Lottie told me how it all got started.

‘After being brought up in Cricklewood in North London, the family moved out to Wiltshire in my teens. Mum was part of the self-sufficiency movement back then and she took her design eye to our tiny cottage and its garden. We’d always been pointed to the native for cooking and as I grew to be an adult, my Mum created an oasis for the family. Cocktails were also part of my upbringing. We made sloe gin and blackberry whisky. It all became a part of tradition brought up to date in my mind.’

I was asked to create a Chelsea Fringe Collins for Alan Titchmarsh to enjoy on camera.

How did the idea for Midnight Apothecary come about? 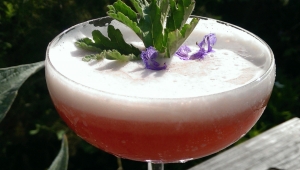 ‘In 2010-11, living in Rotherhithe I got a gardening diploma and with the onset of Olympic mania, I approached Robert Hulse Director at the Brunel Museum to build a garden on top of the Thames Tunnel Shaft. We got money from the Mayor toward the design and with help from TCV, Brunel and Southwark, we created a fruit, flower and herb garden. We added a 50m diameter village green to the Rotherhithe village in a sheltered sun trap with shade from the Acacias above! 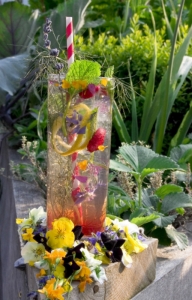 The Brunel Museum was taking part that year in Museums at Night in mid-May. Robert wanted a night-time event – hence the Midnight in our title – on the Saturday and pulled me in at the last moment. Time Out picked up on our initial advertising and 120 people turned up! We went into crisis mode but the evening of marshmallows roasting on an open fire, sausages and a bar went down a storm. We clearly had a winner! Without knowing it, we had become part of a new phenomenon in London, the pop-up bar. We started running a fortnightly bar and when the Evening Standard published an article on us, we were established!’

So how has the idea developed? What are you up to now?
‘Well I’ve become devoted to making ‘shrubs’ which are a great traditional way to preserve plant material in a mix of vinegar and sugar. They provide the distinctive flavours to our cocktails and together with infusions and syrups are my particular task in the week. On Saturdays in the season, a team of five welcome between 150 and 200 people to the garden. We charge £5 to get in which goes toward the Museum’s costs and everyone gets a guided descent into the Shaft as part of their evening. 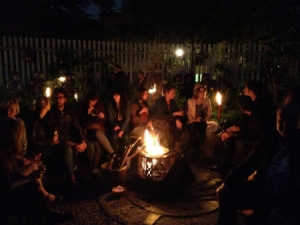 The Fire Pit at Midnight Apothecary

I’ve started being invited to run Wild Cocktail Workshops now where we can explore how to grow it, forage for it and stick it in a glass! Last year, I was at the Chelsea Flower Show fringe and so when the fringe featured on the BBC’s coverage, I was asked to create a Chelsea Fringe Collins for Alan Titchmarsh to enjoy on camera. I’ve just got a mobile pop-up bar to take botanical cocktails around the festivals too. In March this year, I published Wild Cocktails from the Midnight Apothecary and I’m now involved in promoting it as well as preparing for the new season that starts on Saturday 2 May. I might branch out into selling syrups at local markets around SE London and there might be a second book! It’s pretty hectic as you can imagine!’

We made sloe gin and blackberry whisky. It all became a part of tradition

So in a short time Midnight Apothecary has become an established part of Rotherhithe life. What keeps you going here?
‘Rotherhithe is a magical place. From a single vantage point, you can see the London Eye and a beach with a seal on it. Running the garden has introduced me to my neighbours like nothing else and I just think it’s an extraordinary place. The mix of housing and all sorts of people makes it quite unique in the city. We really need to protect the area from developers and celebrate the great local community round here.’

Midnight Apothecary starts a new season on Saturday 2 May at 17:30-22:00 at the Brunel Museum Price: £5 entry. Look out for other Saturday events before then!