Mudbus comes to the Farm – again!

­
Previous Next
Mudbus comes to the Farm – again! 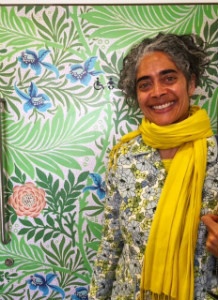 “I just love to give people access to clay. The experience of moulding clay to your vision is quite magical.” Sharon Virtue is a community artist and local resident. She’s been working with clay and ceramics for years and now brings her passion to Surrey Docks Farm for a second set of after-school sessions. “We had a whale of a time last October and as lots of people wanted more, I’m planning another whole season of clay creation – the Mud bus is coming to the Farm again!” says Sharon.

Sharon once worked in San Francisco at Ruby’s Clay Studio where she designed and managed a mobile ceramics studio called the Mud Bus. The project won several awards and funding for the outreach to kids aged 5 to 18 using ceramics as a route to engagement. “When I got back to the UK in 2012, I took an MA in Community Arts at Goldsmiths. I brought together my love of painting and ceramics in a project on the Broadwater Farm estate in Tottenham called Harmony Gardens. I have been working in SE16 over the last couple of years, for example taking up the pop-up shop in Albion Street in the summer of 2015.” 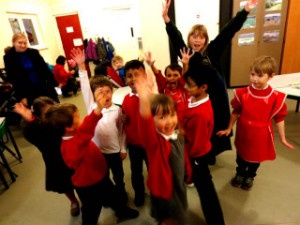 Making a Virtue of Clay

The first set of sessions at Surrey Docks Farm was held back in October and November 2015. They came about through an extraordinary set of coincidences, as Sharon explained. “The classroom at the Farm is ideal for ceramics and indeed clay has been used there before. But the major problem has been that we needed a kiln to fire the pots in. I bumped into a friend who is part of a ceramics cooperative based down the road in Deptford. By chance, they had just made a application for a new kiln and so I was able to get started with that.” The sessions ran for seven weeks and allowed Sharon to coach a group of enthusiastic young people from local schools. 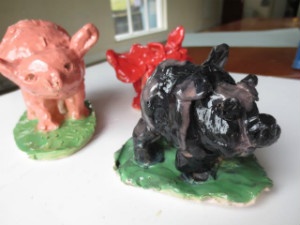 “This second set of sessions arose from conversations with Gemma, the manager at the Farm and was triggered by interest from Time and Talents (T&T) in bringing youngsters together with their parents and grandparents to look at the skills that each could offer the others. T&T calls the project Crafty Beasts and hopes to get it up and running in the summer. With the additional opportunity of working with older people as well as primary school ages, I put together a grant application to the Arts Council which was successful in April this year. It’s really exciting to be able to work with such a range of people in my own community, to link up with two great local community hubs and to be creating in a way I so much enjoy.” 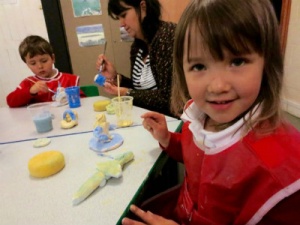 During the sessions, Sharon is keen to create an atmosphere of mutual learning and sharing skills. “We always encourage those who have gone one step ahead to help out those who are not getting along quite so swiftly. It all makes for a fun and energized time for everyone.” Sharon is also looking out for an apprentice to help run the sessions and to learn the craft from her. “I’d love to be able to pass on the skills and knowledge I’ve gained from working with clay. It would be fantastic to find someone local who shared my passion for clay and would like to understand how to both practice as a ceramicist and teach others.” And, I asked, what would success look like? “If we could raise the money to buy a mobile Mud Bus, I would be overjoyed,” replied Sharon. “There is nothing like having a mobile kiln and a clay workshop on wheels to bring a community together and really create strong bonds between people of all backgrounds. That would be success!” 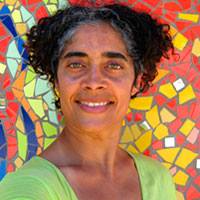