A New Bridge for Rotherhithe

­
Previous Next
A New Bridge for Rotherhithe 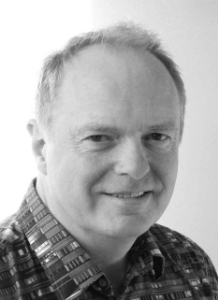 “We know there will be a new bridge across the Thames between Rotherhithe and Canary Wharf,” says Nik Randall of reForm Architects. “The question is what design will be chosen, how long it will take to commission and when the first journeys will be possible.” I went into the reForm Architects’ offices in London Bridge to meet Nik and talk about the efforts he and his colleagues are putting into promoting their ‘Boomerang Bridge’. It’s a small team with big ambitions. “We know we are up against the large design firms but we think we’ve a superb design which will win the day if we can get it funded, understood and supported.”

“…Sustrans estimated that the bridge would take 10,500 cyclist journeys each day and a further 3,000 pedestrians…” 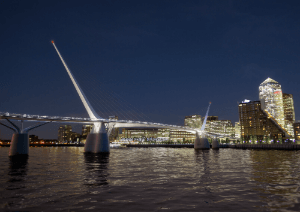 How did you come to this design then?

“I’ve lived in Southwark for 26 years and had offices here for 17 years so the transport difficulties faced by Rotherhithe have been in my awareness for a long time. A bridge to link it to Canary Wharf seemed an obvious answer and so we began to look at possible landing sites on each bank. This was a ‘self-start’ initiative as we had no client or funding at that stage… we just thought there was a clear need that should be addressed.”

Naturally, as the bridge is downstream of Tower Bridge it will have to open and so Nik and his team investigated different ways this might be achieved. “I came up with the idea to use the back masts both as a means to support the enormous cantilevers that would be necessary and as bascules, (or counterbalance weights) to aid the opening of the bridge. This now seems obvious but to our knowledge has never been done anywhere in the world before.” Working closely with engineers Elliott Wood Partnership reForm developed the concept further, registered their design and started approaching organisations to try to promote and fund it. As a result, reForm worked with Sustrans on their feasibility study – commissioned by Transport for London (TfL) and paid for through local businesses – looking at the viability of the crossing. 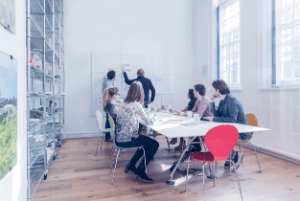 “There are many challenges for the crossing. Existing and planned buildings restrict the options for where to land the bridge on each bank as does a need to position the bridge away from the bends in the river, for navigational reasons. There’s a navigable channel which has to be respected and the Jubilee Line runs beneath so it’s actually very tight, but we showed that it is feasible.” 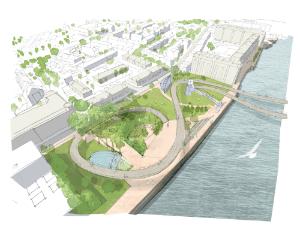 So what are the benefits of the bridge?

“It will link Rotherhithe to the DLR, Jubliee Line and Crossrail. Sustrans estimated that the bridge would take 10,500 cyclist journeys each day and a further 3,000 pedestrians,  Three thousand of the cyclist journeys would be during the morning rush. Reducing the demand on the Jubilee line and the Rotherhithe Tunnel at their busiest can only make those journeys smoother as well.” 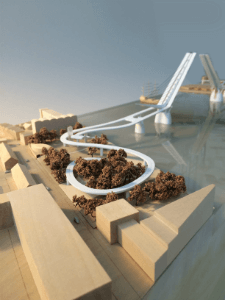 “For Rotherhithe, the landing in Durand’s Wharf means that at least three routes will take the majority of the extra cycle journeys – the Thames Path, Salter Road and Rotherhithe Street. If most cyclists can be directed across to Salter Road, then the link to the soon-to-be Cycle Superhighway 04 (Tower Bridge to Woolwich) will be easily negotiated. The British Land Masterplan will of course make access to Canary Wharf and all points east from there still more pressing, so the earlier this can get the go-ahead the better.”

So what’s it cost and what are the next steps?

“Whilst it’s clear a bridge is coming to Rotherhithe, the ‘Boomerang’ design we are promoting has not yet been put up against competition. Our quantity surveyors Arup tell us the total cost will be about £175M, which compares favourably with other bridges. If we got the go-ahead today, we could have the bridge in operation within five years but the next steps really lie with the new Mayor of London and his/her transport advisors. It is likely that the bridge will be put out for public procurement for either design and/or build. That will delay matters and costs will continue to rise in the interim. We’d like to be able to press forward using private investment for the planning process and perhaps part of the build. But in the end, the politicians will need to be persuaded that it’s the best deal on the table. The support of a bridge by the main contenders for Mayor is heartening but more telling will be the support for our beautiful design from local people and businesses on both sides of the Thames.”

To read about the general proposals for a cycle and pedestrian bridge in East London, sign up with Sustrans to keep in touch with their campaign. sustrans.org.uk/bikebridge

For more about the other bascule bridges of Rotherhithe, read Andie Byrnes’ recent article on A Rotherhithe Blog.