The Biscuit Factory is now a thriving commercial and business complex on the junction of Drummond Road and Clements Road in Bermondsey SE16. It is formed of a variety of buildings now converted to serve modern business needs. The complex was however until 1989 a centre of a global industry of biscuit making, the main production centre of Peek Frean’s Biscuits. Founded in 1857, Peek Frean’s employed thousands of Bermondsey families for generations and gave the name ‘Biscuit Town’ to the area. Originating such classics as Garibaldi, Bourbon, shortcake and Marie, the factory was a central part of local life and gave everyone the pleasure of the smell of baking biscuits on a regular basis! I’ve written more about the Biscuit Factory here. 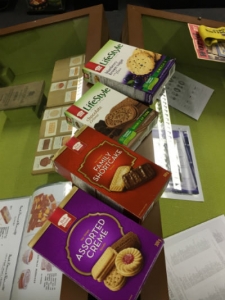 When Nabisco & Reynolds (later taken over by KKR)  took over in the 1980s, their decision to close the Bermondsey plant in 1987 was greeted with dismay as many local people were made redundant and a major employer was removed from the local economy. After the initial shock and anger, a small group of loyal former employees worked to collect and preserve the records and historic artefacts of the great firm. Together with a bequest from Peek Frean’s themselves, many local people who had worked at the site also had prized bits and pieces about Peek Frean’s in their day and were willing to donate them to the growing collection. As a consequence, the memory of Peek Frean’s was preserved in a collection that found a home at the then Pumphouse Educational Museum next to Lavender Pond in Rotherhithe.

The Pumphouse Museum was successful in gaining a grant from the Heritage Lottery Fund in 2004 to conserve and display the collection. They created some excellent interpretation panels and constructed display cases for the wide selection of items that offered a picture of the history, activities and products of Peek Freans’s and the Bermondsey factory. They managed to display the famous 2m high model of the Queen’s Wedding Cake made at Peek Freans’ in 1947 which had graced the Reception Room of the factory.  Caroline Marais, her volunteers and board published a booklet about Peek Frean’s history and the exhibition was formerly opened by Chris Carr, son of the last Managing Director of Peek Frean’s. Southwark News covered the opening in a feature article in September 2005. 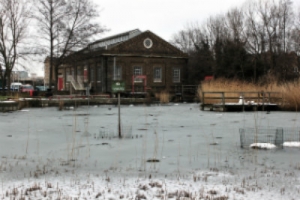 Sadly in 2010, the Pumphouse Educational Museum was forced to close when the Council withdrew financial support. After a short battle to keep the Museum and educational facilities open, the charity that ran the building closed its doors ironically on the very day that a blue plaque to the Museum was unveiled. The Peek Frean’s collection was mothballed for some time whilst decisions were made about the future of the Museum’s wider collection until in June 2012, at the very last moment with the building becoming unsafe, the Peek Frean’s collection was saved and moved back to The Biscuit Factory. 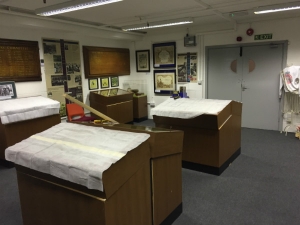 Gary Magold and Frank Turner – a former Peek Frean’s employee – had been working in the background to save the history of Peek Frean’s from being sold off or just decaying at the Pumphouse Museum.The owners of the Tower Bridge Business Complex, Workspace generously offered the use of a three-room unit on the second floor of a secure block on the Biscuit Factory site. Frank and Gary managed to get into the Pumphouse at the last moment and rescued the display cases, information stands and collection of Peek Frean’s memorabilia. Sadly they were unable to move the wedding cake model as made of icing it had become too fragile. 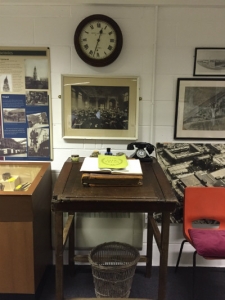 Since then Gary and Ken have been working in their spare time to curate the collection in its new location. They have set up the display cases again and used the information panels to add depth to the information about the firm’s history. Frank’s special interest in the Peek Frean’s Club which ran many sporting activities for employees and other locals has led him to many new discoveries. The collection has also been expanded with some items purchased on eBay and elsewhere that enhance the overall coverage of the displays. As the building is shared with many other organisations, access to the new Museum is by appointment only; visitors have to be escorted to and from the building but as you can see from the photos, it is well worth a visit providing an invaluable insight into the lives of many who lived in Bermondsey for over 125 years.

I am grateful for the assistance of Gary Magold and Mike Reardon in compiling this article. If you wish to visit the new Museum, please contact Gary at E: gary.magold@btopenworld.com