­
Previous Next
Ramadan and Eid

The month of Ramadan is celebrated across the world by Muslims as a time of fasting and prayer. The Islamic lunar ninth month has played a key part in Muslim life since the time of the Prophet and fasting and prayer during Ramadan is one of the pillars of Islam. Fasting (sawm) begins at dawn and ends at sunset and Muslims will not eat, drink, smoke or have sex during these hours. During Ramadan, the fast is begun after a morning meal (Suhoor) and finishes with an evening meal (Iftar). The evening meal normally starts with dates following the example of the Prophet and then the fourth of the five daily prayers are said before the main meal is eaten.

This year in Southwark, Ramadan will end when the new moon is first seen locally in the new month of Shawwal, which will fall on either 17 or 18 July 2015. 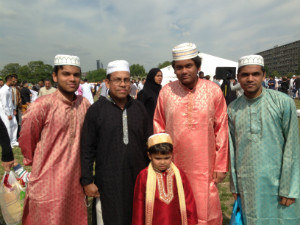 Fasting for Ramadan can be a demanding practice for many Muslims. Alongside the lack of food and drink, many also try to use the month to increase their devotion and worship as well as giving more to charity, being more reflective and restrained in their actions. When Ramadan falls in the summer – as this year in Southwark – the fast can be longer and more demanding than at other times of the year. At present, we are drawing to the end of Ramadan and many Muslims in Southwark are looking forward to concluding Ramadan with the Festival of Eid.

During Ramadan, the fast is begun after a morning meal (Suhoor) and finishes with an evening meal (Iftar).

This year in Southwark, Ramadan will end when the new moon is first seen locally in the new month of Shawwal, which will fall on either 17 or 18 July 2015. The first day of the tenth month is when Eid al-Fitr is celebrated, the festival of the breaking of the fast. It is a day when Muslims come together from across their diverse backgrounds and traditions to show their unity and in Southwark, the Muslim community meet in Burgess Park at 10:00 for open air prayers. After communal prayers, the family-friendly event (11:00-20:00) gets under way with many great stalls, activities and fairground rides for all the family. The event is very friendly and welcoming to non-Muslims as well as bringing together people from across the globe in united devotion.

More about the Southwark Eid Festival here and about Ramadan here