We are pleased to welcome Mike Reardon – one of the contributors who keep this website going – as our guest writer today.

Hi I’m Mike Reardon and I was not only brought up here, and have lived here all my life but I also have a real interest in Rotherhithe’s history. In the 1980s, I went to Albion Street Primary School and learnt of a Peace prize they awarded to pupils there. I knew it was something to do with ‘the war’ but as a youngster took no notice. In 1990, I was awarded the Peace prize just as I moved on to secondary school. It came in the form of an italic inscription in a book about birds. I put the book aside and life moved on.

“…The general scheme which is of the Louis Quatorze period, is carried out in a harmonious blending of ivory and gold…” 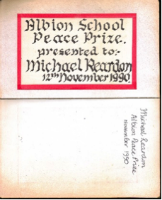 Origins of the Peace Prize

Digging deeper more recently, I discovered its origins in the Great War 1914-18. Rotherhithe sent many men and boys to fight from a close-knit community, often school chums from the same school. In 1919, the survivors arranged a one-off show at the Rotherhithe Hippodrome that made a profit of about £100. They placed the profit in trust for the school, the annual bonus of which was to be spent on peace prizes for the children at Albion Street. As the years went by, at around Armistice Day the children would put on a play before local dignitaries such as the vicar, school governors and the local MP. The play and prize continued until about 2000 when the prize money had dwindled to only about £4, too little to supply a prize for the boy and girl who tried the hardest all year. The play continued but funded by other means.

So I have a personal history with the Rotherhithe Hippodrome. A Peace prize, a play and a show back in 1919. What was all this about?

Rotherhithe Hippodrome was first built in 1899 and opened as the Terriss Theatre. It was severely damaged in the Second World War and stood as a shell for a further decade before being levelled in favour of the Rotherhithe Free Church building that stands in Lower Road today. It’s on the junction with Culling Road. Messrs Walter Wallis and Co built the theatre to the designs by W.G.R Sprague, well-known theatre architects of their day. The theatre was named after an actor murdered outside the Adelphi Theatre nearly two years before. That actor – William Terriss (1847-97) – had decided he was going to build a theatre on the same site in Rotherhithe and had made an appointment to sort out the purchase of the land. Only the day before Richard Archer Prince killed him. (You can read the full details here.) The directors decided to call the theatre after Mr Terriss in his memory.

In The Era (9 July 1898), an advertisement stated the theatre was “…to be opened early in 1899…Decorations and furniture by Waring’s. Magnificent structure to hold 4,000 People. Entirely lighted by Electricity. Popular Prices…” Sadly the Terriss Theatre only opened on Monday 16 October 1899 with a production of the Drury Lane drama “The White Heather”. It had a reduced capacity of only 2,087 but the stage was all of 70ft (21.5m) by 32ft (9.75m). In The Era (14 October 1899), a preview of the building read: 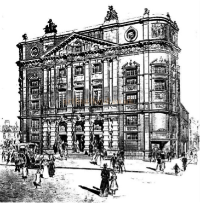 “On Monday the latest addition to the ranks of the suburban playhouses – the Terriss Theatre, Rotherhithe – will be opened to the public. As seen from the road the building presents a most imposing appearance, with its red brick exterior, faced with York stone, and its plastered front, and the architect, Mr W. G. R. Sprague, in overcoming the difficulties of the site, has succeeded in producing a building worthy of the reputation he has gained in this branch of architecture”.

“The interior decoration, which had been entrusted to Messrs Waring, reached a high standard of excellence. The general scheme which is of the Louis Quatorze period, is carried out in a harmonious blending of ivory and gold, whose rich tones are enhanced by the deep ruby tint of the upholstery, while the general effect is heightened by the auditorium ceiling with its Picturesquely painted centre and side panels. This ceiling. Which had been made the subject of special study by Mr Sprague, would evoke admiration wherever seen for its elaborate mouldings and soft tones, while the final touch of beauty is given by the finely moulded proscenium arch”.

“…Every kind of comedian, singer and speciality act supplied entertainment in these eleven years with the programme often including burlesque and sketches…”

In 1907, the theatre was sold to Walter Gibbons who managed to gain a licence for music and dancing but not for alcohol. In December 1907, the theatre opened as the Rotherhithe Hippodrome for twice nightly variety. The opening bill included Georg Hackenschmidt ‘The Russian Lion’, the famous strong man. Around this time, the London Theatre of Varieties Syndicate was formed and they seemed to retain ownership for the rest of the Hippodrome’s history. The premises were often leased to other managements and whilst plays and full-scale productions were still put on, variety continued under Charles Gulliver as the standard offering until 1918. Every kind of comedian, singer and speciality act supplied entertainment in these eleven years with the programme often including burlesque and sketches. 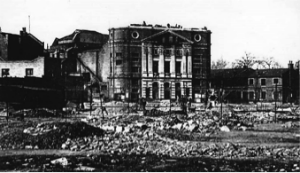 In June 1943 during World War Two, the Rotherhithe Hippodrome closed only to reopen a few months later for a final season for plays and variety. When it closed once again, Hitler’s bombs damaged the building and it remained an empty shell remembered by many local youngsters as a place for play and adventure. It was finally demolished in 1955 to be replaced by the Free Church buildings of today.

Rotherhithe Hippodrome lasted less than 50 years as a theatre, little known outside its own neighbourhood. It opened at a time when the thrill of melodrama still held provincial audiences in its grip but soon having to contend with the growth of easy transport to the West End and changes of taste in entertainment. Closely following on, the immense and rapid spread of cinemas and the coming of sound pictures meant it had no future by the 1940s.

Many thanks to Arthur Lloyd for his superb site about the history of music hall and theatre
arthurlloyd.co.uk/Rotherhithe.htm