­
Previous Next
Warships, East Indiamen and Clippers – Rotherhithe’s shipbuilding past

Today’s guest author is Andie Byrnes local resident and historian who regularly writes about Rotherhithe’s history on her site A Rotherhithe Blog. Here she takes us on a shipbuilding tour of ship-building and breaking in SE16.

It is perhaps surprising that today’s gentle residential reaches of the Thames around Rotherhithe were a vibrant scene of industrial activity for at least three centuries. By the 1800s shipyards and wharves laced the Thames foreshore in a thin band between the river and Rotherhithe Street. To the east the pattern of shipbuilding activities continued into Deptford, whilst to the west a more even mixture of housing and ship-related services was evolving in Bermondsey. The somewhat marshy interior was occupied mainly by market gardens until the 1800s when the docks began to expand. Just as today, the bend in the river that encompasses the northern part of Rotherhithe was divided into different communities stretching from Rotherhithe village in the west to Downtown in the east. 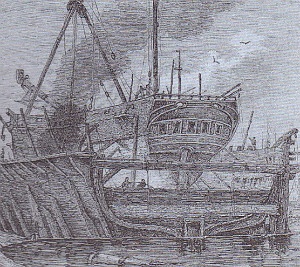 From the 17th century onwards Rotherhithe was at the heart of the Thames shipbuilding tradition, producing warships, grand wooden vessels powered by billowing sails, armed to the hilt. Top-ranked ships were built only in the Royal shipyards but smaller ships were often contracted out to private shipyards. In Rotherhithe a number of shipbuilders specialized in these lucrative and prestigious contracts, the earliest known being HMS Taunton launched in 1654 by William Castle. A boost for all private shipyards was the establishment in 1600 of the Honourable East India Company, which required large armed cargo ships that travelled the enormous distances to India and China.

“…Nelson Dock was used by ship builders since at least the 1690, and witnessed the launch of naval ships, East Indiamen, clippers, and even a ship specially equipped for the opium trade!…” 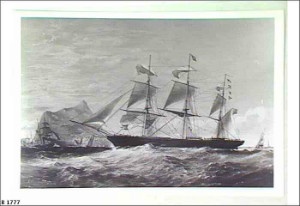 Sailing round the world

In 1833 the East India Company lost its monopoly in the China tea trade, opening up opportunities for private traders, many of them ship-builders to engage in the eastern trade. Accordingly, they built sailing ships with beautiful lines known as clippers, which were built for high value but low volume cargoes, and particularly for speed. A very fast clipper might accomplish the round trip between Britain and China in under 100 days, whereas it could take an East Indiaman as much as a year to complete the same journey. The first ships of the Orient Line, which later became P&O, were built during the mid-1800s in Rotherhithe by Thomas Bilbe at Nelson Dock for the London to Australia route. William Walker’s 1870 Lothair, one of the fastest of the China tea clippers, completing the trip from China to London in just 84 days. It was the last big sailing ship to be built in Rotherhithe, marking the end of an era.

Sadly, shipbuilding was changing, making it difficult for traditional Rotherhithe ship builders to compete. Steam power was revolutionizing ship design throughout the 1800s, with the increasing importance of paddle steamers. Next, wood was slowly replaced by iron. Whilst some Rotherhithe ship builders began to produce steam ships, none made the transition to iron, which was a specialized new technology that permitted the building of much longer and deeper hulls for which Rotherhithe yards were not equipped. The writing was on the wall for sail-powered wooden ships. Finally, when the Suez Canal opened in 1869, linking the Mediterranean with the Red Sea, the dangerous trip around the African continent could be avoided. Although sailing ships experienced problems navigating the complex conditions of the Red Sea, steam ships handled it without difficulty. 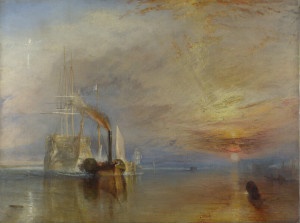 Rotherhithe’s response to all these changes was to shift its focus from building ships to breaking them up, already a time-honoured business along the Thames. Timber had a high value in all areas of construction and even old rope was sold off for conversion into other products. The most famous ship to be broken here was HMS Temeraire, in 1838. The largest warship ever to be brought down that Thames at that date, she was broken by the Beatsons, the site of their yard preserved as an inlet located immediately to the east of today’s Salt Quay pub. The event was immortalized in J.M.W. Turner’s “The Fighting Temeraire” soon to adorn our £20 notes. 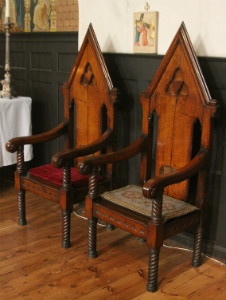 Other traces of Rotherhithe’s role in the shipbuilding industry can be found if you know what to look for. A quick look at the Ordnance Survey map of 1868 shows just how many of these dry docks were still preserved at that date, and a walk along the Thames Path will provide the eagle-eyed observer with a few clues as to their location. The best preserved example is Nelson Dock, now in the grounds of the Double Tree by Hilton, which also preserves Thomas Bilbe’s 1860 patented slip (engineered for the clippers that he launched here). Known in the past as Cuckold’s Point, Nelson Dock was used by ship builders since at least the 1690, and witnessed the launch of naval ships, East Indiamen, clippers, and even a ship specially equipped for the opium trade! The beautiful Nelson House was the home of John Randall in the 18th Century, the only surviving shipbuilder’s home in Rotherhithe. 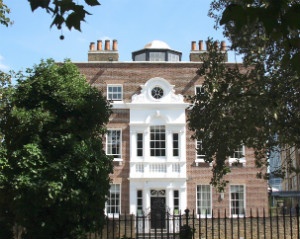 Surrey Docks Farm sits on one of the other most important Rotherhithe shipyards, owned by brothers John and William Wells and then, over two generations, by the Barnard family. The Thames foreshore below the Farm preserves a lot of ship building debris from this period. A final example of Rotherhithe’s shipping heritage is perhaps the most endearing. Two chairs now in St Mary’s Rotherhithe were built from the timbers of HMS Temeraire after she had been broken for parts. In neighbouring Bermondsey, where Bevington Street and Farncombe Streets SE16 are now found, enormous rope-walks radiated from a point near the railway line all the way to the river, part of the complex local supply infrastructure that maintained sailing ships in all their glory.

Although Rotherhithe’s three centuries of ship-building came to an end in the late 1800s, barge building continued to be a vibrant industry, and the development of the vast network of cargo docks meant that Rotherhithe sustained its relationship with shipping until 1970, when the docks closed.

More about shipbuilding in Rotherhithe from British Transport Treasures