­
Previous Next
Save The Clipper

Do you think we need a partnership between developers and the community?

Do you think we need places that give our growing community space to meet, to play and to socialise?

Do you want to stand up for our heritage and the character of Rotherhithe Street?

The Clipper Pub on Rotherhithe Street between Timbrell Place and Silver Walk is facing demolition. A Council planning committee are considering an application (14/AP/4337) from McCullochs of Bromley Kent to knock down the pub and build a four storey block with a retail unit on the ground floor and six flats on the first, second and third floors. At the planning sub-committee B on 28 April, Andrew Large of CAMRA spoke up for the pub’s retention and the discussion was protracted. In the end, a decision was delayed until the committee members had seen the site for themselves and the potential for light problems to be caused to neighbouring properties by the new building. The date of that site visit is now set for Monday 22 June at 19:00. The committee is due to reconvene to consider their decision on the planning application on Wednesday 1 July at 19:00.

Cllr David Hubber (Lib Dem – Surrey Docks) – who sits on the committee – has expressed his disquiet at the application as so many pubs have been lost in the area since he was first elected. At that time, there were 12 in the area and now there are only 5. He was also critical of the design of the building. 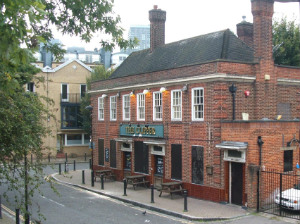 The only way to prevent this pub being lost for ever is for the community to list it as an Asset of Community Value with the London Borough of Southwark. This so-called Right to Bid is a provision under the Localism Act 2011 which gives communities the right to identify assets in their area that have existing community use. Once identified and listed as such by the local authority, these buildings and land get some protection from sale without the community’s involvement. In the current situation, a charity or a group of 21 individuals from Southwark can nominate The Clipper as an asset but we have to provide evidence of the ‘social, recreational and cultural’ value of the pub to the community. A specific form has to be completed and delivered to the Council with all the evidence in time to be assessed before the committee makes it’s decision on 1 July.

As Andrew Large wrote on the campaign’s Facebook group Save The Clipper:

Just in case people are being shy, your story does not need to be an epic; just a few words will do. Also, the last 5 years is the target period, so ‘played in the pool team in 2012’, for example would fit the bill. Also if you are elderly [or disabled] or have relatives or friends who relied on the pub for social interaction, this is worth a mention as social exclusion of the elderly [and disabled] is an ever increasing problem in society these days. A pub has always been and continues to be a place where service remains personal and you can meet up and interact with others as frequently and for as long as you like.

PLEASE join Save The Clipper (Facebook group) and show your support. Add your stories and offer to sign here.

Find out more about listing as an Asset of Community Value