Save the Red Derrick

­
Previous Next
Save the Red Derrick

Rotherhithe in the first half of the twentieth century was a centre of the timber trade. Known for it’s vast stocks of wood from across the Northern hemisphere, the timber ponds and saw mills dominated at least half of the Surrey Commercial Docks. Soft wood timber imported from Scandinavia was known as deal and the deal porters who handled it in the cold and wet with incredible dexterity and courage were a distinctive part of Rotherhithe life. The trade brought strong relations with Norway, Sweden and Finland, seamen came and settled and the church missions to their people became churches and hostels. The timber trade has left an indissoluble mark of the life of Rotherhithe. 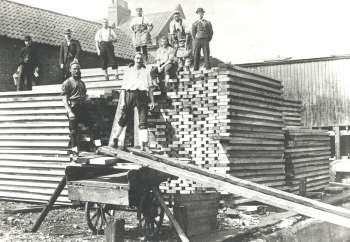 A new threat to that heritage has now appeared. The London Docklands Development Corporation (LDDC) – who developed the derelict docks of the 1980s into the residential Rotherhithe we know today – chose to commemorate the history of handling wood and trading in timber by preserving a single iconic crane – or more formally a derrick – on the riverside in Downtown. Standing proud on concrete piles, it arches out over the water at the end of Odessa Street by the redundant youth club and old Downtown nightclub. The Red Derrick has been much loved as a symbol of the dockland history and specifically the timber trade that so enriched this area. Find out more at A Rotherhithe Blog where Andie Byrnes offers some history of the crane.

New homes in its place

Now developers – Hollybrook Homes, a family-run business based just into SE1 – plan to take the derrick out, clear the site and build a block of 48 flats overlooking the river, of which 16 will be officially ‘affordable’. The site was protected by a restrictive covenant that meant it could only be used for open space but the GLA has recently agreed to lift that covenant. The development would allow the Thames Path to be reinstated in front of New Caledonian Wharf and a new café built on the ground floor of the new unit. The Council point out that the crane has been used as a climbing frame and that pigeons roost in its structure; as such, it is claimed to be a hazard to health and safety. You can read (and hear) more about the deal on the SE16.com site here and here.

The Council’s own report acknowledges ‘[t]he removal of the crane may result in some members of the community being concerned about the loss of a heritage feature. However, the safety of the wider community including persons inclined to climb upon it and users of the Thames Path being subject to pigeon mess must over-ride this concern.’ Indeed Cllr David Hubber of Surrey Docks ward described the crane as ‘a relict…just a perch for pigeons…nothing more than a nuisance.’

Surely it is possible to preserve this landmark on the riverside?

The concern of local people has now been expressed in an online petition ‘Save the Red Crane Odessa Wharf in Surrey Quays’ on change.org led by David Murphy, a retired docker. The petition reads as follows:

‘• the Red Crane is the last crane surviving from the Surrey Docks – now the developers want to get rid of it!

• the LDDC preserved it as part the common heritage of the area and protected it with covenanted public land.

• since the handover 25 years ago the red Crane has sat harmlessly in its original position on the Thames Path and is a well known point of interest for ramblers, Thames tourist boats and locals. Please discover more about the Red Crane on line.

• Southwark has struck a secret commercial deal with a developer to privatise public land and remove and cut up the crane, in order to build luxury riverside flats, without public consultation. Please lend your support to SAVE OUR CRANE! 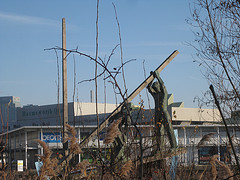 • Southwark says it will extend the Thames Path but this will only be by another 50 metres. In exchange London loses a part of its heritage and public recreational open space will be lost. Southwark cites that a small proportion of affordable homes will also be built as a result. But why should this entail the loss of the Red Crane?

• Southwark, if necessary, should only permit a re-development including the Crane in its present position and not its highly probable destruction and removal from where it has always been

• Your signature and support will help preserve public open space and a local much loved landmark.’

Planning permission has yet to be applied for but is likely to be viewed positively as the Council has been instrumental in bringing the parties together and sealing the deal so far. The planning process will involve public consultation about the public realm changes but the planning officers dealing with the application should be made very aware of widespread disquiet about the proposals.

Surely it is possible to preserve this landmark on the riverside? Is it impossible to imagine keeping it safe from climbers and finding ways to prevent pigeons roosting on it? The land is immensely valuable, the demand for housing is huge and at present the area certainly feels down-at–heal. But this can’t be the right solution to destroy such a beloved heritage feature for walkers, residents and river tourists alike.