Today’s article is written by Pat Kingwell, Secretary of the Friends of Southwark Park and a local historian 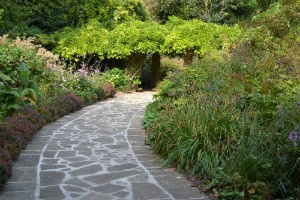 How lucky we are to have Southwark Park! It is one of London’s oldest parks – first opened to the public in June 1869 – yet it still has huge relevance to our modern lives. It is a surprisingly peaceful place in the midst of high density buildings and a network of busy roads. It can be a beautiful refuge from the clamour of the city, but is also somewhere to play, take part in sports and physical activity or enjoy lively cultural events, such as the annual Bermondsey Carnival (this year on 2 July) or the CGP London’s Open Exhibition (8-24 July). 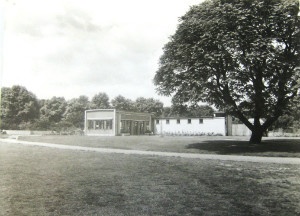 Rotherhithe has certainly seen many changes since the park was created on the site of rural lands, which were purchased by the Metropolitan Board of Works from Sir William Maynard Gomm for £56,200 (at least £4.5m in current values). Victorian London grew very rapidly, and with urbanisation came social problems – poor housing, overcrowding, poverty and insanitary conditions resulting in disease, especially cholera which regularly plagued the district. Providing public parks was seen as one part of the solution. Access to fresh air, recreation for the body and the civilising effect of Nature on the mind, were reasons frequently put forward by the pioneers of parks. Keeping people fit for heavy work in the local factories and industries and diverting them from crime and alcohol were other rationales. Southwark Park grew out of such a background.

We enjoy our park due to the notable efforts of some inhabitants of Bermondsey and Rotherhithe from long ago. In April 1856 a memorial was signed by over 250 people and presented to Bermondsey Vestry, calling for a park. In response the Vestry set up a Parks Committee, whose key members included:

“…The efforts of the pioneers led to the Southwark Park Act 1864, which gave powers to create the space we love…” 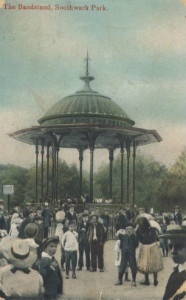 The Park’s bandstand in early 1900s

If Bermondsey took the campaigning lead on the park, Rotherhithe soon joined in. The Rotherhithe Vestry also formed a Park Committee which pushed for an alternative plan. The key advocates were: 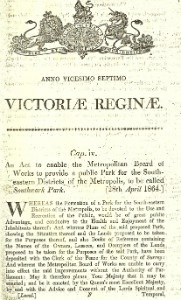 The efforts of the pioneers led to the Southwark Park Act 1864, which gave powers to create the space we love. Despite vast changes in the area since 1864 the park boundaries have thankfully remained largely intact. The second half of the last century saw some rearrangements to meet the demands of post-war housing and traffic, but generally the various managing authorities have respected Southwark Park’s integrity. And long may that continue!

Within the boundaries there have been many alterations. In 1869 Southwark Park was a rather plain place, consisting mostly of open land, paths for walking and little horticultural attraction. Over time, usually as a result of determined local campaigning, improvements were made, including a lake (1885) then extended (1908); a lovely bandstand (1889); a bowling green (1912);; the ornamental Ada Salter Garden (1936); a café (1953) later converted into an art gallery; a one o’clock club (1960s) and a sports centre (1983). All of these attractions can be found in the park today, as well as other features such as the Jabez West memorial, the former Rotherhithe Town Hall Caryatides, new tennis courts and CGP London’s Dilston Grove art space.

The Friends of Southwark Park welcome new members. It costs nothing to join. Find a membership form here.

Meetings are held once month at the Park Offices. Details can be found here.