­
Previous Next
St Saviour’s Abbey, Bermondsey – the origins of SE16

Today we explore the origins of Bermondsey in the settlement around Bermondsey Abbey, the origin of much of the shape and form of SE16 as well as giving names to key locations.

The beginning of history

If we stretch our imagination back to a time before SE16 even existed, before indeed Rotherhithe or Bermondsey existed, the south bank of the meandering Thames was a rather inhospitable place. Part-land and part-river, SE16 was a marshy swampy place with a few careful routes for travellers and fishermen to take, often flooded by tide or storm. The departure of the Romans in c410 CE, the town of Londinium fell into disrepair and much of the Thames valley was left to itself. The earliest mention of Bermondsey (known then as Vermundesei) is found in a 12th century manuscript written at Peterborough Abbey. It is in turn a copy of a transcript of a letter from Pope Constantine (708-715CE) in which he grants privileges to a monastery at Vermundesei. This was the first evidence of any church settlement in the area, probably on a patch of drier land in the midst of the bogs and marshes of the area. 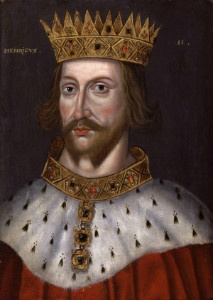 Once the Norman conquest reached the Thames, a new chapter opened for Bermondsey. In 1082, Alwinus Child founded a monastery dedicated to St Saviour and recorded in The Domesday Book as ‘a new and handsome church’. (Rotherhithe failed to be mentioned in The Domesday book, probably being only a small hamlet at the time.) The new monastery was soon established as a Cluniac priory (a reformed version of the Benedictine order) when four monks from La Charité-sur-Loire in France arrived and Peter became the first prior. From the outset, St Saviour’s priory had the support of the royal family and gifts of land and property followed. Indeed at Christmas 1154, Henry II (pictured) – the first Plantagenet king of England – and his wife Eleanor of Aquitaine held court at Bermondsey Priory. In late February 1155, their second child Henry was born there. Over the subsequent centuries of the medieval period, the Priory amassed a huge land holding in six counties. 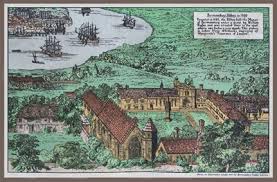 A Victorian fantasy of Bermondsey Abbey

The priory church was built where Bermondsey Square is currently found. For two centuries, the monastery was under the direct control of the French order with a French prior and so its lands regarded as foreign and suspect in time of war. The Kentish ragstone building was huge and of course would have been the centre of the community’s life, providing a mill, bake house and employment for everyone. The monks – often French in origin – were instrumental in building up the banks of the Thames, canalising the Neckinger and other local tributaries. In 1213, they built a hospital and one of the first schools in the London area. They drained and farmed the land through the local labourers and shaped the landscape across the whole of SE16 for example by digging many tidal ditches. The damp and dismal life of the monks can well be imagined and many died an early death as did priors and Abbots.

“…the archaeologists were amazed to find the structure of the Cluniac Monastery in very good condition. The outer walls stand over a metre in height and some remains of the Norman church from c1080 were also found…” 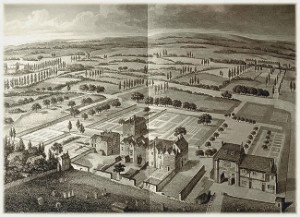 By 1374, the first English Prior was appointed and this initiated a cascade of changes that brought the prior independence from French control and the awarding of the status of Abbey ruled by an abbot.

Today we can see the influence of the Abbey in some road layouts and certainly in the names of many local roads. Abbey Street is the most obvious. It was laid out early in the 1800s when the buildings of Bermondsey House (see below) were demolished. It runs through the east-west spine of the abbey church; before that it had been the large garden of the House. Grange Road led from the Abbey to a farmhouse and barns that served the local area. Bermondsey Street is the track leading from the Abbey to the river toward London Bridge and of course St Saviour’s Dock – the tidal mouth of the Neckinger – was created by the monks. Long Walk (now Lane) was a place for the Abbot and monks to stroll and enjoy the fresh air – rather different now!

In the reign of Henry VIII, the legitimacy and lifestyle of religious orders came under scrutiny and the king destroyed much of the wealth and prestige of English monasteries. For Bermondsey from 1537, this meant the estate being broken up and sale of the abbey buildings in the end to Sir Thomas Pope, who founded Trinity College, Oxford. He demolished many of the buildings and built a fine new mansion for himself, Bermondsey House. The present Pope Street is probably a memory of this transformation of the whole community. 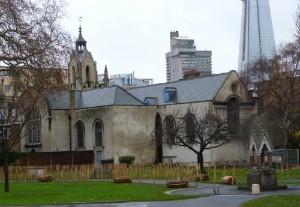 Remains in bricks and culture

Left today are only the remnants of the old Abbey. St Mary Magdalen in Bermondsey Street was first mentioned in 1290 as a small church in the hands of the priory but was largely rebuilt in 1680 on the same site. It is now the oldest building in Bermondsey. The remains of the south-western tower of the St Saviour’s Abbey itself can be seen below the glass floor of the Del’Aziz restaurant and bar on Bermondsey Square and three houses on Grange Walk incorporate some of the Abbey’s remains. Along with the roads and layout of Bermondsey, elements of the culture and tradition of SE16 reach back to the Abbey’s central part in the area’s life.

Some suggest that The Blue came to its name as the result of a hermit (or anchorite) having their solitary lodging nearby. He or she might perhaps have been a particularly devout member of the order who was called to a life of extreme poverty and solitude. The colour blue has always been associated with holiness and especially the Virgin Mary, so perhaps the Abbey and its religious foundation played a role in naming The Blue itself. St Saviour’s Estate of course is named after the Abbey and its blocks – Attilburgh, Thomson, Norman – after the abbots who ruled there (and their successors).

“…By Tudor times, Bermondsey could be parcelled up and sold off for redevelopment…” 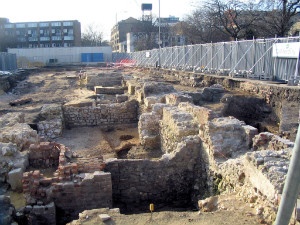 Looking beneath the surface

In 2006, developers moved in to transform an old piece of derelict land into today’s Bermondsey Square. They worked with the archaeologists from the Museum of London (as required by planning law) and uncovered the buried remains of the medieval Abbey church and gatehouse. In fact, the archaeologists were amazed to find the structure of the Cluniac Monastery in very good condition. The outer walls stand over a metre in height and some remains of the Norman church from c 1080 were also found. The remains of several monks were found as well as graffiti carved into the stonework showing a medieval knight. A number of other buildings had been erected on the site through the years giving historians some further clues to the development of Bermondsey. The developer amended their plans, redesigning piles and layouts to minimise the damage to the remaining evidence of the past. Other than below the floor in Del’Aziz restaurant, the remains were recorded, preserved and covered over again for future archaeologists to study.

The Abbey dominated the early history of SE16. Rotherhithe – or Redriffe as it was often known – was mostly marshes with a ribbon of settlement around the river’s edge; the marshes became market gardens as the drainage was improved and the inundations became fewer. Bermondsey grew up around St Saviour’s, a religious house that for some years in the Middle Ages was successful and well supported. But as its life declined, so too did the settlement around it. By Tudor times, Bermondsey could be parcelled up and sold off for redevelopment. Its past was forgotten except for the shape of the area, its roads and rivers and the echo of the Abbey in the ground itself. 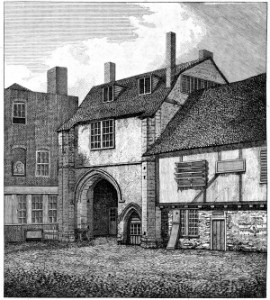 For more about the early history of Bermondsey, see British History Online british-history.ac.uk

History of the County of Surrey: Volume 2: House of Cluniac monks: Abbey of Bermondsey