Making historic buildings beautiful is the task of the original architect and specialists in stone restoration. Stone Edge have been part of SE16 for four years now, a conservation and restoration company working on listed buildings, stately homes, churches, government buildings and ancient scheduled monuments. I went to their office in Rotherhithe to meet up with two of their Directors – local resident Robert Butler and Richard Denneny. They explained how the firm had started out. 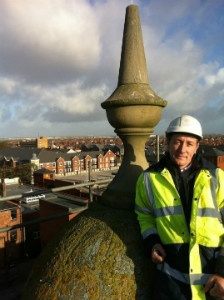 “We three – Kevin, Robert and I – met up some years back,” explained Richard. “We’d all been in the restoration business for over a decade. In 2004, I set up Stone Edge from my home near Blackburn, working mostly on northern projects; as we grew, I realised that much of the investment was in the south. So in 2011, I got in touch with Kevin and Robert again and we agreed to open a London office. At first we rented nearby in Cannon Wharf but a year ago, we moved in here in St Olav’s Court in Rotherhithe. We have all the London and Southeast admin and office functions here and our store is over in the Biscuit Factory in Bermondsey. We’ve run out of space in both sites so are looking to combine them somehow in a new location, hopefully around here.” 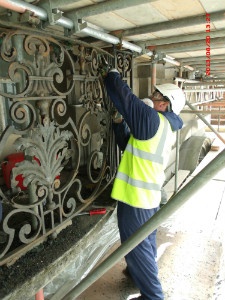 Alongside the highest standard of stonemasonry, Stone Edge offer a range of other specialties to their prospective clients such as lead work, carpentry and joinery, brickwork repair, roof repairs and replacements, lime plasters and mortars and heritage metal work and bronze work. They are always on the look out for good craftsmen and their team has become a really important asset to the firm over the years. “We are really proud of the fact that since we moved our London office here, we’ve not lost a single one of our 35 employees and been able to take on two apprentices too. Half a dozen of the staff live round here as well.” 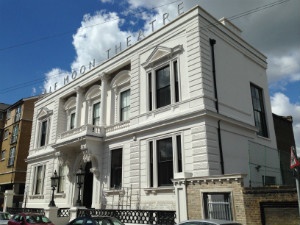 Working nationally, Stone Edge have worked on many London buildings, many of them well-known. They are about to get started on the iconic Windmill Theatre in Windmill Street, Soho that is in need of some careful restoration having survived unclosed throughout WWII. They have just completed the installation of a Cathodic Protection system at the art deco Euston House (1934), on Eversholt Street once the HQ of the British Railways Board. When Fortum and Mason in Piccadilly needed their façade refurbished, Stone Edge repaired the roof, changed the upper windows and gave the elevations a spring clean. The team are proud of their part in the restoration of the stucco façades of the Half Moon Theatre in Limehouse. Stone Edge has cared for both St Andrew’s Stoke Newington and Christ Church Hampstead. They also handle public buildings and hotels that have seen better days. For example The Trafalgar Hotel on Trafalgar Square required cleaning and restoration of a fine sculpture by Louis Frederick Roslyn high on its façade. Stone Edge were up to the job.

“…Having built a reputation in a specialist field, Stone Edge now gets some blue chip clients…” 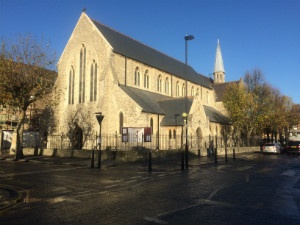 Having built a reputation in a specialist field, Stone Edge now gets some blue chip clients. “Most of our business is either returning clients or people reach us by word of mouth,” says Robert. “Our business is always needed as buildings often need regular attention as well as facing emergency works. But now we have regular clients from The National Trust, The Crown Estates, English Heritage and even the Historic Royal Palaces. We’ve just confirmed a job at the Tower of London where we will be replacing the main causeway with granite setts.”

“…It’s an ideal location for us sited so close to the city and transport links. It would be a great shame if we had to relocate due to shortage of suitable premises…”

Heritage on the doorstep

Robert and Richard both enjoy being part of Rotherhithe. “It’s great to be around the famous engineer Brunel’s legacy and to find all sorts of fine heritage in the area,’ says Robert. “Since I moved here from Wandsworth, I’ve come to love the area. It’s an ideal location for us sited so close to the city and transport links. It would be a great shame if we had to relocate due to shortage of suitable premises.” Richard who lives in Lancashire loves his social history and so revels in our local heritage. “It’s amazing how much of our past is still here in the streets and buildings of Rotherhithe. We were particularly pleased to find The Mayflower on our doorstep so that’s become a regular haunt for the team.”