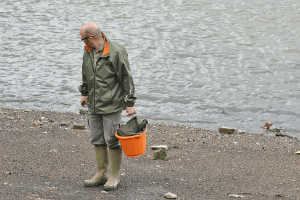 The mudlark was born amongst the filth and chaos of Victorian London. These poor degraded creatures were scavengers, wading through the foul-smelling mud to collect anything they could sell, such as rags, coal and rope. Most mudlarks were children and old people – society’s most vulnerable – these days, however, mudlarking is a term used by a band of amateur archaeologists that scour the foreshore of the River Thames for signs of history. The story told by one such Victorian youngster was recorded by Henry Mayhew in ‘London Labour and London Poor’ (1861) and their lives have been the source for films, books and plays ever since. 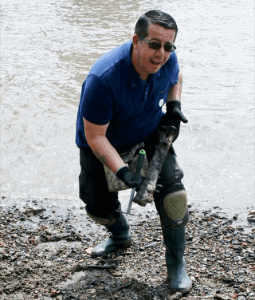 Today, mudlarks are no longer those made vulnerable by age or social standing. Mudlarks play a key role in uncovering – literally – the history of the Thames through the ages. Our local mudlark Alan Murphy is out most days on the foreshore around Bermondsey and Rotherhithe and has been for the last fifteen years, searching for the signs of the past in the river’s silt, mud and gravel. I met up with him in Surrey Quays Shopping Centre and he explained how he got into mudlarking. “Back in the 1970s, when I was a kid in Bermondsey, we used to play on the foreshore and I suppose I just got addicted. With each tide the river offers up a whole new set of finds, taking away mud and slit here and depositing new material there. Over the years, I must have found thousands of different items from every age and telling the story of London in intriguing ways.” 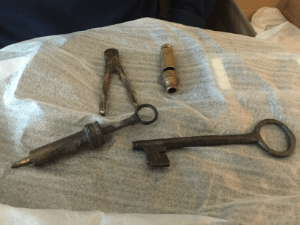 Getting your mudlark eye in

“The key to mudlarking is being able to see the find in the chaotic debris of the foreshore. I find that I can see better when its raining since it brings out the sheen on metal, glass and pottery. But of course I’m governed by the tides,” laughs Alan. “The river uncovers the foreshore twice a day and so I spend about 3-4 hours each day down there. Sometimes, I’ve been out night mudlarking with a head torch but mostly I chose daylight hours so the longer days now allow more time each day. I often head down to the water’s edge as that’s the area that’s active most of the time.” 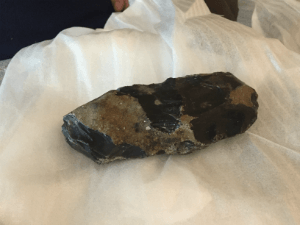 Keeping to the rules

“There are good reasons that mudlarking is a controlled and licenced activity. Digging in the foreshore is completely prohibited without a licence from the Port of London Authority. Even then, with a beginners licence (£72 for 3 years) you can only scrap down 7.5cm (3.5 inches) and can only search in permitted areas. The problems caused by digging are very serious if they are uncontrolled. Building foundations can be undermined, disturb one area and a much larger area may be washed away and large finds are best excavated by skilled archaeologists. It’s also unnecessary. I find 95% of my finds by eye and never dig into the compact London clay at all.”

“Any finds need to be understood. The majority of my time is spent on the research to establish what my finds really are, their background and meaning. I’ve loads of places to look online and in books so I’m often acting as a detective once back from the river. Anything important needs to be notified to Kate Sumnall Portable Antiquities Scheme’s Finds Liaison Officer within two weeks of the find,” said Alan. “Record-keeping is vital – where and how things were found can make sense of other finds in the same area and be the key piece in a jigsaw of evidence. If it proves historically valuable, then the Museum will record it in the Portable Antiquities Scheme (PAS), together with the finder and location. As a mudlark, you need to develop evidence of your finds with the Museum and PAS.” 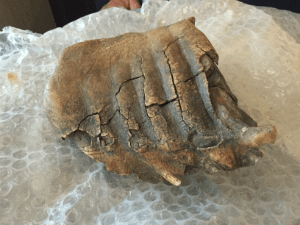 “You really need to record all your finds with the Museum of London and only mudlark on the Thames foreshore with a current licence from the PLA,” pleaded Alan. “If you are only looking on the surface for finds, then you don’t need a licence but then you can’t disturb the foreshore in any way. In the past, we lost a huge amount of our heritage when the unscrupulous would spirit away finds, never to be seen again. Responsible mudlarks record everything. It’s the best way to help our understanding of the Thames’ liquid history and you might even see your find on display in one of the Museum’s exhibitions!

I asked Alan what a newbie mudlark should be aware of. 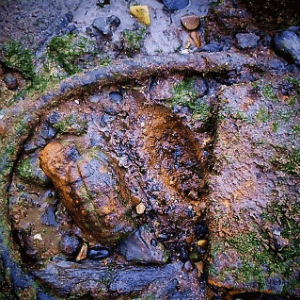 “Over the years, I’ve found an array of artefacts that trace the history of London and its river through the centuries,” Alan recalls. “Clay pipes are one of the most common finds as they were the disposable pleasure of many dockers. Coins and buttons are everywhere too as well as bricks and other ‘waste’ hardware disposed of in the river. Some finds are more unusual such as the medieval girl’s/woman’s shoe still laced or the mammoth tooth from well before London was founded. The Thames Tranchet Azde pick comes from the Mesolithic period (8300-3500 BCE) but I’ve also found a wealth of keys, whistles and even a mercury syringe! These were lying on the surface of the foreshore in full view but just took a lucky moment, a sharp eye and some patient research to discover their full story.”

Thames and Field – the home of London Mudlarking
thamesandfield.com