­
Previous Next
The Annual Hop 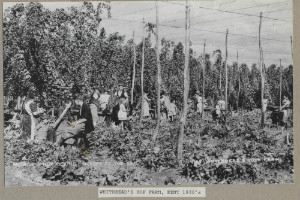 Bermondsey’s past is often told in terms of the Thames-side wharves, where specialised food and spices arrived to fill ‘London’s Larder,’ from Britain’s imperial trade. Whilst the riverside was the place of male employment, in summers past the women and children took a different path, travelling out to Kent for the Annual Hop. The hop harvest was an annual highlight of docker family life and gave many a youngster an amazing family holiday in the open fields and vivid surroundings of Kent in September each year.

The circumstances of many in the Victorian back-to-backs were often cramped and precarious due to the piece-work traditions of dock labour. The opportunity for the women of the family to earn a little pocket money, to have a break from the intensely urban life of Bermondsey and to travel with neighbours and friends to new places – all these made the trip worthwhile. Whole streets would up sticks and move to the same farm each year, setting up home in the same configuration as back at home. 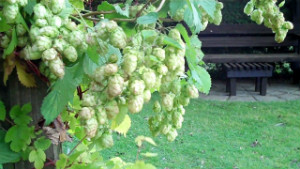 The work of picking the hops was hard and demanding. Hops are the female flowers (also called seed cones or strobiles) of the hop plant (humulus lupulus). They are used primarily as a flavouring and stability agent in beer, to which they impart a bitter, tangy flavour. They are also used for some medicines and other beverages. The harvest happens in early September and between the 1920s and the 1950s hundreds of thousands of Londoners were needed in the fields of Kent and Sussex to bring in the crop. ‘Hopper specials’ trains were put on from London Bridge to transport the army of workers estimated at 250,000 from inner London out to Maidstone, Faversham and Paddock Wood and further to Sussex, Surrey and Hampshire. Those who couldn’t afford the fare would walk the 36 miles to Kent on foot.

“…As a picker you soon got into it. You would take down a hop stem, called a bine, and lay it across your lap, and pick from it into a bin… It was such a wonderful way of life. Everyone seemed to be happy…”

Stall for hoppers to buy essentials

The majority of this seasonal labour force was put up in hopper huts. These were initially just thrown up shacks of timber but were increasingly regulated and so became more uniform and standardised over time. In 1866, the Society for Employment and Improved Lodgings for Hop-Pickers was formed by a group of Christian philanthropists. The first bylaws covering hop-pickers’ accommodation were adopted at Bromley in Kent under the Sanitary Acts Amendment Act 1874. Huts were built to a standard size – either 9ft by 9ft or 8ft by 10ft. Nissen Huts were later used as accommodation for hop-pickers. The huts generally had an earth floor, and were lit by either candles or paraffin lamps. Water was provided by standpipe which had to be within 150 yards (140 m) and sanitation provided by a dedicated toilet block, usually with an earth closet. 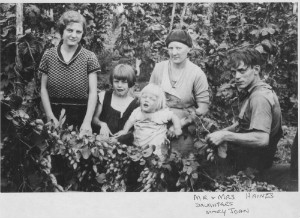 The accounts of those who went hop-picking glow with a warmth of childhood recollection.
“As a picker you soon got into it. You would take down a hop stem, called a bine, and lay it across your lap, and pick from it into a bin… It was such a wonderful way of life. Everyone seemed to be happy.” (Jean Mitchell)

Many older residents of Bermondsey today remember their days in the fields of Kent with nostalgia and delight. But compared to earlier in the century, by the 1970s only a mere handful of seasonal jobs in hop-picking were still available. Increasing mechanisation of the process meant that hop-picking became less labour-intensive. Gone were many of the hopper’s huts and replaced with reminiscence and story-telling. The beer industry was moving on and the lives of those families who once picked the hops were changing out of all recognition.