­
Previous Next
The Watch House and Old Mortuary 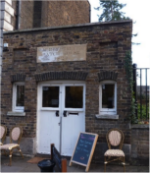 little café, nestled next to the St Mary Rotherhithe Free School today known as the Peter Hills School. This building was originally a Watch House, one of the first in London, built in 1821, as the stone plaque above the door indicates.

The watch house had a cell in the basement where suspects could be held and was staffed by a beadle (a parish constable associated with the church), a constable and 14 watchmen.

There were different categories of watchman. Those who wore white overcoats and carried lanterns were meant to be seen and heard, as they called the time and weather. Watchmen wearing blue were ‘silent’ and looked for wrong-doing in the dark corners of the local area, possibly why our policemen wear blue to this day.

The site of the Watch House is also important, being placed next to St Mary’s Churchyard. in the early nineteenth century, body snatching was rife as surgeons at the local Guy’s Hospital required fresh corpses and body parts for medical research. It was also a lucrative business. Bodies that washed up on the river were worth more money sold to doctors than taken to the mortuary in Rotherhithe.

Grave robbers – or ‘Resurrection Men‘ as they became known – would dig up bodies from fresh graves and disguise them as merchandise, although legally, only bodies of convicted criminals could be taken for medical research. In 1832, the Anatomy Act was passed, making it an offence to rob a grave, effectively putting the grave-robbers out of business.

The Rotherhithe Watch House closed in 1829, the same year the Metropolitan Police Force was formed, but luckily survived to become a Grade II listed building. The attractive café it now houses has access through the rear to a pretty outside seating area in the park that was once the Churchyard. 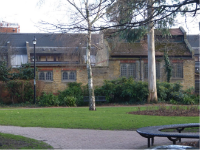 On the opposite side of the old churchyard – now a park with grave stones on one side – to the Watch House is the Old Mortuary. Built in 1895, it replaced an earlier mortuary building that was not fit for purpose. Interestingly, the watch house was used as a temporary mortuary whilst it was being built.

In 1885-1886, the inquest records show that 28 men were drowned in Surrey Docks and the river either by suicide or accident. Many others were received at Rotherhithe Mortuary, but following a damming report by a Dr. James who performed post mortems there, it was determined that better equipped facilities were required to deal with the bodies.

Constructed on a budget, the Vestry surveyor, Norman Scorgie, was employed for its design and the cheapest builder to quote – a T. White & Son from Bow – was hired for the job at £988. Unfortunately the local builders proved too expensive at £1,277! The total cost, including post-mortem scales was just under £1,000, but it was well built and to time.

Designed for the Dead

The rooms included infectious and non-infectious mortuaries, post mortem room and a microscopic room – for the use of microscopes rather than being incredibly small! There was also a viewing gallery. Practical details such as water to all rooms, drainage channels in the floors, hooks in the ceiling and a rotary dissecting table were also included. The only external windows were on the North side and high up. There were also fan lights that opened and closed for ventilation.

The Old Mortuary closed for reception of bodies in 1965 and eventually in 1980, Time and Talents Association, a charity local to the area since 1887, took over the building as a community centre. Among the many activities taking place there now are the meetings of the Rotherhithe and Bermondsey Local History Group a fitting use for such an historic building!

You can find out more about Time and Talents and its current work here and here.

The History Society meets each month at 19:45 at Time and Talents. At their next meeting on 25 March Gerrymander Speedwell will explore the last 270 years of the Surrey Docks Farm site in Downtown SE16.

If you would be interested in contributing a short article on your favourite SE16 building or organisation, please get in touch shout@iliveinse16.com.