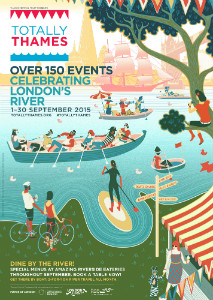 Each September, the whole city enjoys a month of Thames-themed celebration. The Totally Thames festival is run by the Thames Festival Trust and is billed as a collaboration between the river-side boroughs, the tourist agency London First, the Arts Council and the Mayor’s office. This year the offering is as spectacular as ever and with some events having started already!

“…boats with at least four oars or paddles and the vessels must each carry at least one passenger. The race is billed as ‘London’s River Marathon’…” 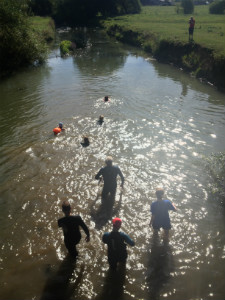 Already underway is the Source to Sea River Relay that will form a chain of different means of transport and events carrying a bottle of Thames water collected from a field near Kemble in Gloucestershire on 15 August. From 30 August onwards for the third year running, the Bottle will then be helped on its journey downstream towards London by rowers, walkers, swimmers (pictured), paddleboarders, kayakers, sailors, punters and many more. It arrives near us in SE16 on Saturday 19 September, when it will become part of a weekend of design activities hosted by the Design Museum. On Monday 21, the bottle will be at the Ahoy Centre in Deptford and on 22 September, it will join a day workshop on bottles and Ships in Bottles at the National Maritime Museum in Greenwich. 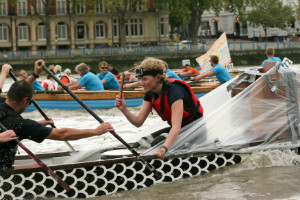 Mucking about in Boats

On Saturday 12 September, the Great River Race 2015 will start at 10:45 from the Millwall Dock Slipway, visible from SE16 on the Thames Path by South Dock Marina and the Greenland Pier. Over 300 entrants start on a ‘slowest first, fastest last’ handicap basis to give all crews an equal chance. The UK’s Traditional Boat Championship first started in 1988 but has since become a classic event, requiring boats with at least four oars or paddles and the vessels must each carry at least one passenger. The race is billed as ‘London’s River Marathon’ as the route is just about the same length – 21 gruelling miles to Richmond! Both serious sports women and men and charity rowers in fancy dress all join in to make it a fantastic day of visual splendour and picturesque settings.

“…Soapbox Science bringing science straight from the lab onto the streets…” 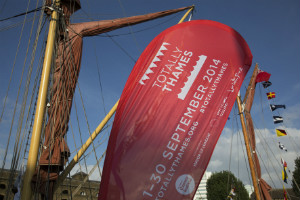 Eighth Wonder of the World

With a more SE16 focus, Robert Hulse Director of the Brunel Museum in Rotherhithe is leading a Thames Boat Trip: Brunel’s London each Tuesday, Thursday and Saturday in September. It starts at 10:45 from Embankment Tube and ends at the Museum at 13:30. The trip includes a boat trip under three Brunel bridges to the launch ways of Brunel’s monster ship and a train journey through his Tunnel into a secret underground chamber. As the Tunnel shaft is due to close in October, this is a last chance to crawl into the ‘eighth wonder of the world’. And who could ask for a more knowledgeable guide than Robert who has been accompanying the Brunel’s lives and work – both Marc and son Isambard Kingdom – for a decade now! 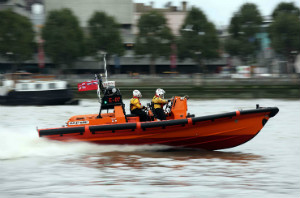 Free family fun is promised at the Riverside Festival running 12:00-19:00 on Saturday 5 and again on Sunday 6 September at Potter’s Fields Park. The weekend will hold some of the best new troubadour and folk sounds on the Boatshed Stage; Soapbox Science bringing science straight from the lab onto the streets; the animals of Vauxhall City Farm; entertainment from the Unicorn Theatre; the one and only Spurting Man by Avanti Display and Santander will be there to help visitors unlock the Thames on two wheels with their Santander Cycles’ ‘Summer of Cycling’.

Whatever you enjoy doing around the river, Totally Thames has something for you!