­
Previous Next
Walking Football with Millwall 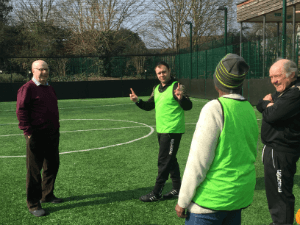 Millwall Community Trust has for many years now supported the community of SE16 by offering sports coaching and facilities in an accessible environment. Their work with young people – using football to engage those who are disillusioned and disaffected – has proved hugely successful and popular. Now Richard White who leads up their community development is offering something for a different group: those who are isolated by age and frailty particularly those with Alzheimers and other forms of dementia. The new craze for walking football has opened up a unique opportunity for preventive healthcare in a community environment.

“…After consultation, we now provide once a week activities every Friday morning at the Dockland Settlements in Salter Road, Rotherhithe who have fantastic facilities and are a great partner to have on board….” 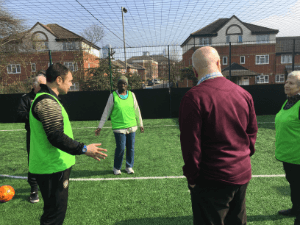 Walking football is a new form of the beautiful game which inspires the over 50s to get out of their armchairs and back into exercise. It’s become a smash hit across the country as more and more teams are coming together to compete for the emerging league and cup honours. The rules of walking football are much the same as its speedier cousin, however there are some differences. The squads are smaller (between five and seven-a-side), free kicks are indirect, kick-ins replace throws, there are no offsides, the ball must be kept below head height and, of course, anything so much as a jog is prohibited. In truth the rules are still being consolidated and the game is still ‘finding its feet’ so to speak.

Richard was keen to tell me about the many benefits of such gentle exercise for people with dementia and their carers. “It’s obvious from the first that people can get very isolated at home,” says Richard, indicating one of the new group meeting today for the first time. “He and his wife can get along fine at home but they find getting out to social events – with his increasing loss of memory and coordination – really stressful. So the social opportunity is a key component of the sessions. And it brings men and women together on equal terms!”

“…Now we can get out and meet others, have some fun and he can get to score a few goals again!…” 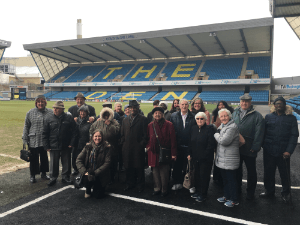 “And then,” continues Richard, “the activity itself is hugely beneficial. Simply kicking a ball or throwing one to a partner requires balance and hand-eye coordination that often deteriorates with age. Keeping these skills up can improve other aspects of life and clearly reduces the risk of injury to all parts of the body. The evidence is clear that simple regular exercise can help reduce dementia in older people, reduces falls and broken bones, saving social and health services a great cost in putting them to rights. We hold the sessions in the open air which itself is important. Many people are often cooped up inside with few opportunities to get outdoors. Keeping active is a great way to keep spirits up and open up new possibilities.”

“After consultation, we now provide once a week activities every Friday morning at the Dockland Settlements in Salter Road, Rotherhithe who have fantastic facilities and are a great partner to have on board.  The Dockland Settlements were able to offer the space free of charge as well, for which we are very grateful. We also thought that spring was the best season to make a fresh start like this as the weather should only improve. For me, whilst we’ve held walking football at the Lions Centre for the last year – open to everyone – this is a new venture, working with people with mental health issues and limited mobility. The warm welcome from the folk at the Darwin Court café run by Southwark Alzheimer’s Society was tremendous; we went there before Christmas to gauge the level of interest and came away with loads of people wanting to join the sessions.” In early March, they even got a bus trip to Millwall’s ground and a guided tour of The Den! 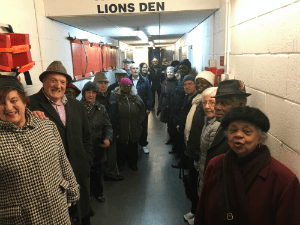 I’d turned up at the first full session at the Dockland Settlements in mid-March where Richard was coaching. John and Mavis sat next to me over a cuppa and we got chatting. “It’s a great idea!” said Mavis. “John’s always enjoyed a game of football but in recent years, that’s just become impossible given his condition. Now we can get out and meet others, have some fun and he can get to score a few goals again!” Richard was eager to point to the limited funding for this sort of preventative work. He was really grateful for Southwark Neighbourhood Fund who supported the set up costs of this experiment in 2015-16 but now with that funding exhausted, Richard is keen to find other sponsors, volunteers and to get the message out to more potential players. “Come along and join in on Friday at 10:00 for a cuppa, 10:30 for the football – it’s fun, relaxed and social. You are sure to enjoy yourself!”